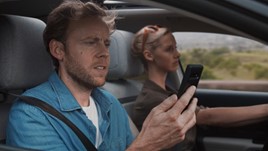 Revised prices for the new model were announced at the beginning of the year, along with a reduction in CO2 emissions.

The car is now priced from £24,435 and offered with petrol or diesel engines. A plug-in hybrid version will join the range this year with a zero-emission range of 31 miles.

The new advertising campaign is centred around the message: “disconnect in complete comfort”.

It was filmed in India and features the range topping Flair+ model, a firm favourite amongst UK buyers with both upper trim levels accounting for 98% of sales in 2019.

In the film, a father appears to be compulsively searching for phone network coverage to stay connected during his holiday on the other side of the world. The man goes from one hotel to the next, his arms in the air and his eyes fixated on his phone, packing his bags in a disheartened mood each time. Eventually, in the middle of the desert, a look of intense relief crosses the father’s face when he sees ‘No signal’ displayed on his phone – he was in fact trying to completely disconnect.

Citroen says it is reaching out to those people who don’t want an SUV just for show, but who seek a truly comfortable escape, a place to get away from it all, to disconnect and forget the daily hustle and bustle.

The campaign air on TV in the UK January 6 and will continue to broadcast throughout the coming weeks. Rolled out in a 30-second format, this film will also feature in a Social Media campaign. There will be three short mini-films, in a ten-second format, accompanying the hero edits, showcasing three of the vehicle’s driver assistance systems, including the reversing camera, Grip Control and Highway Driver Assist.