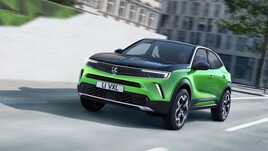 Vauxhall has responded to Government's changes to its plug-in car grant (PiCG) by cutting the list prices of its Mokka-e SUV and Vivaro-e EVs to ensure they remain eligible for the revised incentive.

Last week, the Government reduced the cut-off point for grant eligibility from £50,000 to £35,000 and cut the incentive from £3,000 to £2,500 and carmakers have acted fast to communicate changes to their pricing and finance models to ensure customers don't lose out.

Paul Wilcox, managing director of Vauxhall, said: “At Vauxhall, we believe in making sure our vehicles are as accessible as possible to the greatest number of people, and especially so when it comes to zero emissions-in-use motoring, so I am pleased to confirm that all Corsa-e, all Mokka-e and the new Vivaro-e Life Combi are eligible for the Government plug-in car grant.”

Vauxhall's revised prices for the Mokka-e SE Premium see it now start from £33,040 OTR, while the range-topping Mokka-e Launch Edition starts from £34,995 OTR.

To ensure the Vivaro-e Life commercial vehicle still qualifies for the new plug-in grant, meanwhile, Edition models have reduced by more than £2,000, with prices starting from £34,995 OTR.

The Vivaro-e Life Combi will be the same specification level as the Edition model and will also start from £34,995 OTR.

More than 20 elelctrified cars on sale in the UK are understood to have lost their eligibility for the PiCG as a result of last week's changes.

In the wake of the changes, MG pledged to maintain a contribution of £3,000 to EV buyers interested in its ZS EV SUV and MG5 SW EV to maintain earlier benefits, while Skoda and Citroen flagged the ongoing eligibility of their Enyaq and eC4 models.

Car buyers responding to a What Car? survey conducted after Govenment's announcement on the PCiG changes last week described Government’s plug-in grant as “very important” driver of the shift to electric vehicles (EV) as 79% said they disagreed with Government’s recent changes to the scheme.

And more than half (56%) of the 2,456 respondents to a recent What Car? survey said that they would have preferred to see fuel duty raised instead – following an 11-year freeze – as 62%  said that they believe recent changes to the PiCG show Government is not committed to a green future.