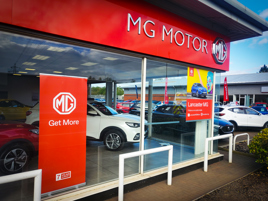 The latest additions include two Arnold Clark sites – one in Bishopbriggs and the other in East Kilbride. This takes the number of MG franchises held by Arnold Clark to seven in total.

The other sites to open in the last few weeks are MG Chiswick, operated by Norton Way, which will increase the brand’s presence in West London and Lancaster MG, operated by DJ Cox.

MG remains the fastest-growing mainstream car brand, reaching a market share of 3.1% in the first quarter of 2022.

Guy Pigounakis, commercial director at MG Motor UK, said: “Growing our retail network while also improving its quality have been key objectives for us as we look to give customers a showroom experience that befits the quality of our products.

“We’re already the fastest growing car brand in the UK but the addition of these new sites to our network will make it even easier for our customers and potential customers to access our fantastic models and get the most out of owning them.”

In 2021 MG grew its UK retail network with the addition of 40 new dealers as its registrations swelled by 66.2% (to 30,600) after adding the flagship HS SUV and MG5 SW electric estate car to its line-up.

The brand has since told its franchised car retailers to stop taking orders for new petrol vehicles after “unprecedented demand” saw it fill its 2022 sales quota by the end of February.

Pigounakis added: “I’m also thrilled with the calibre of dealers we are attracting to the brand, with three very well established and respected partners like Arnold Clark, Norton Way and DJ Cox coming aboard.

“This shows just how much confidence dealers have in the future of the MG brand and underlines our position as one of the most attractive, investible and profitable marques.”