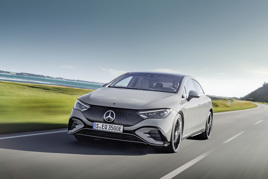 Mercedes-Benz registered the most significant increase in ad awareness, in July, of all car makers, according to data from YouGov BrandIndex.

The German brand was named Auto Advertiser of the Month, by YouGov, after its brand perception score rose by 1.6 perception points, going from 7.2 on June 26 to 8.8 on July 21.

YouGov BrandIndex said Mercedes-Benz’s strong performance in July is likely to be linked to its recent efforts to promote the all-electric EQE. Earlier this month, the brand released a nearly 10-minute video highlighting the car’s various features.

Judging from the strong Ad Awareness results, YouGov BrandIndex said Mercedes-Benz has, at the very least, succeeded in connecting with the audience and lingering in their memories.

The EQE is based on Mercedes’ purpose-built electric vehicle (EV) platform and promises a range of up to 410 miles from a single charge.

The ranking examined the best performing automotive manufacturers according to their overall Index scores – an average of Impression, Value, Quality, Reputation, Satisfaction, and Recommendation scores - between February 1, 2021, and January 31, 2022.