Monday afternoon is the most popular time to buy a new or used motor online, according to Buyacar.co.uk.

Data analysed from thousands of consumers buying new or used cars on Buyacar.co.uk over the past year reveal 4pm on Monday as the most popular time for consumers to press the button on their next car purchase.

The peak time of late afternoon is more of a mystery, when evenings and office lunch breaks might be seen as more suitable moments to press the ‘buy it now’ button.

The concentration of online car-buying activity earlier in the week consistently sees around a third more online car purchases on a typical Monday compared with Saturday – which is the low point for placing car orders online. Almost 25% more cars are bought on a typical Monday and Tuesday combined than during the whole weekend.

“At first we were surprised to see that Monday is our peak day because you’d expect people to be busy getting back into the swing of work rather than going online to make a major purchase,” said Austin Collins (pictured), co-founder and managing director of Buyacar.co.uk.

“But we also know that car buyers do more research than ever before – and like to see their target cars in real life, before choosing one to buy. That probably happens most over the weekend, so it makes sense that people make a final decision soon after that.

“What’s more surprising is how four o’clock on a Monday afternoon consistently proves to be such a popular moment of decision for online car-buyers, rather than lunchtime or evening.”

With the ability to buy round the clock, Buyacar’s research also shows that consumers continue placing orders beyond midnight and look at cars on offer well into the small hours.

The least popular time to place an order for a car is between 2am and 5am. But, with there is a steady climb from 6am until 10am as car orders surge upwards again. 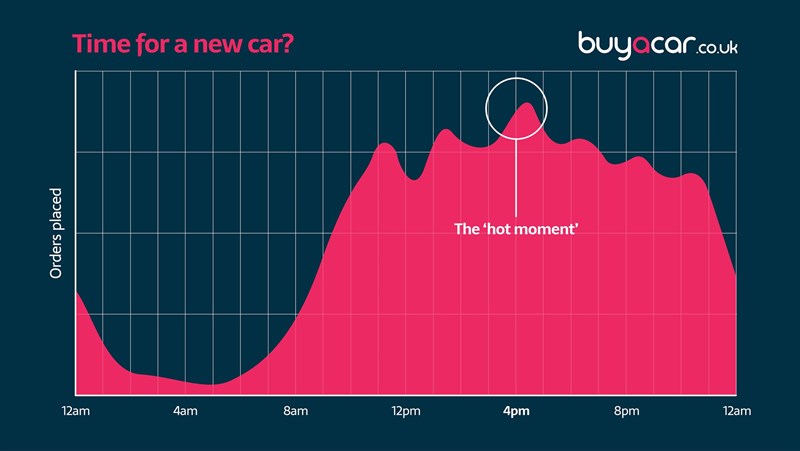