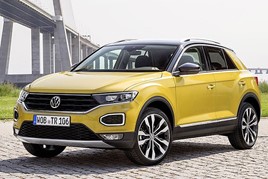 The UK’s 23.1% rise in new car registrations during August left it only 19th out of 27 European countries for volume growth during the month as the effect of WLTP was seen across the region.

Jato Dynamics revealed in its monthly update on registrations in European market that 30% growth to 1.17 million units was the highest August total for 20 years. 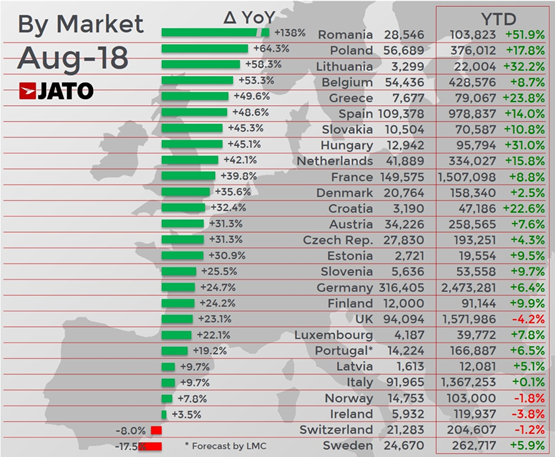 The result also represented the highest monthly growth registered in almost a decade, breaking the record seen in November 2009, when volume grew by 25%.

But Jato branded the strong growth as “somewhat artificial”, as registrations were boosted by stock clearances ahead of the introduction of the new Worldwide Harmonised Light Vehicle Test Procedure on September 1.

It said in its official report statement that the last-minute push for registrations, just a month before the introduction of WLTP, demonstrated “a lack of preparation from many car makers”.

Felipe Munoz, JATO’s Global Analyst, said: “As we anticipated last month, it’s clear that registrations were boosted in August by car makers rushing to register their vehicles before the introduction of WLTP.

“These results show how artificial registrations can be, and how easily they can be manipulated by external factors.

“The evidence of the WLTP effect shows how ill prepared car makers were, and it will be interesting to see how car makers continue to respond to WLTP in the coming months.”

Jato reported that business/fleet purchases posted a 38% increase in August (drawn from data for 15 countries), jumping from 53% of total registrations last August to 59% last month. This compared to registration growth of 11% in July and 5% in June, it said.

Private registrations increased by 11% in August, counting for 41% of the total.

Jato said: “This change was more evident in Spain, Netherlands, France and Austria, where business/fleet registrations grew by 86%, 65%, 54% and 54% respectively.

“The highest market share for business/fleet registrations were seen in Czech Republic (76%), Slovenia (75%) and Finland (73%).”

Jato’s ‘subcompacts’ and ‘compacts’ segments, which have been slow-paced in recent months, also recorded strong growth, up by 25% and 21% respectively, alongside what it referred to as “unusual” 2% growth in MPVs, a segment which has seen “near constant decline during the last years”. 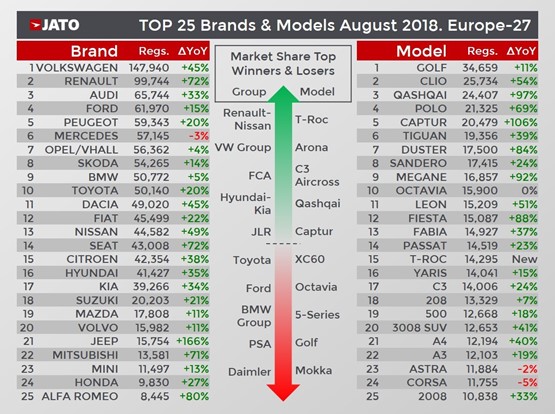 Only the top three of the top 10 bestselling car brands outperformed the market’s average growth.

Volkswagen’s volume was up by 45%, boosted by the business/fleet registrations, which increased by 56% and counted for two-out-of-three of the cars registered, but the T-Roc also delivered impressive growth during August, becoming the month’s 15th best-selling car.

Renault saw an increase of 72% to almost 100,000 units. Its private registrations jumped by 33%, business/fleet registrations doubled and now count for 61% of total volume.

Unlike Volkswagen, Renault doesn’t have a recently launched car to help explain this growth. In comparison, its registrations grew by 20% in July and 1% in June.

Audi, ranked third, was up by 33%, boosted by business/fleet registrations, which counted for 73% of the total and increased the volume by 55%.

The remaining seven brands of the top 10 lost market share, with Mercedes posting the highest drop, as its volume fell by 3%.

This is mainly due to a 28% drop in its private registrations, while the business/fleet grew by only 3%. Some of the brand’s key products, such as the C-Class, CLA and GLA are now seen as older models and face increasing competition from newer rivals, Jato said.

The analyst also noted that August sales of diesel vehicles had also surged during the WLTP switch-over.

SUVs were the clear winners of the month, with their volume up by 57%. They were led by the Nissan Qashqai, which doubled its registrations, the Renault Captur and the Tiguan (excluding the Allspace).