While seasonal market trends and the shorter trading period saw some shift in model mix, BCA saw the headline average value rise by 2.7% (£273) to end a year in which it reported steady demand and a “well-balanced supply of cars”.

Stuart Pearson BCA’s chief operating officer for UK Remarketing, said: “Professional buyers were active throughout the month building forecourt stock for the New Year and demand carried on to BCA’s digital platforms over the Festive Season.”

Pearson added: “With data now available for the full calendar year, it is clear that the used car sector experienced sustained demand in 2018.

“BCA saw values rise steadily during 2018, with professional buyers competing strongly for stock both in-lane and via BCA Live Online.

“Both fleet & lease and dealer part-exchange average values have seen double-digit percentage increases over 2017 figures.  Nearly-new values are a third higher on average than in 2017.” 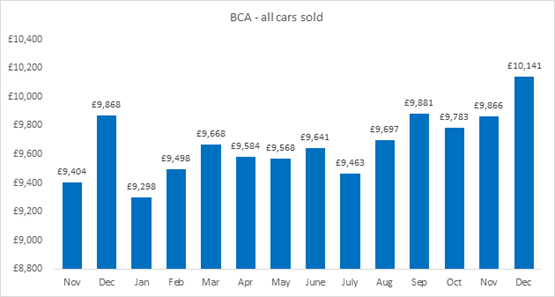 The monthly BCA Pulse report stated that average fleet and lease values in December rose to £11,790, the third highest point on record and “significantly ahead of the same period in 2017”.

Average values were up by £1,186 (11.2%) versus the same month last year, it said, as the retained value against original MRP (Manufacturers Retail Price) slipped by just a half a percentage point to 44.15%. 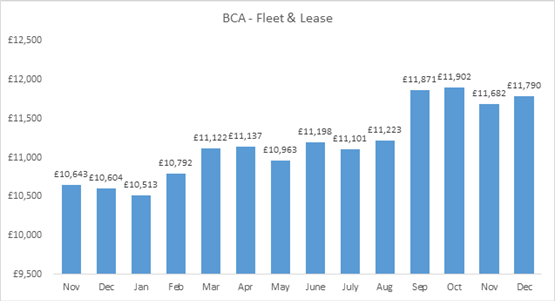 The average mileage and age of part-exchange vehicles continued to rise in December, with values effectively static at £5,275 – the third highest value recorded at BCA for dealer stock.

Year-on-year values were ahead by £502 representing a 10.5% increase over the 12-month period.

BCA Pulse said that sustained demand for nearly-new vehicles during 2018 had seen average values rise in ten of the past twelve months, meanwhile.

December values improved compared to November by £490 (2.0%) with strong competition for the most desirable vehicles.

The average value of £24,660 was the third highest this year and ahead of December 2017 by £5,627 – a 29.5% uplift.  Model mix has a significant effect in this very low volume sector, with brand specific winners and losers. 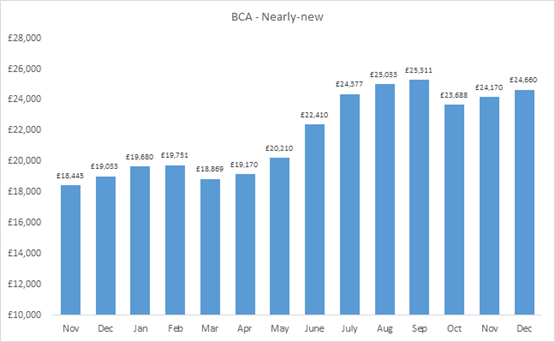