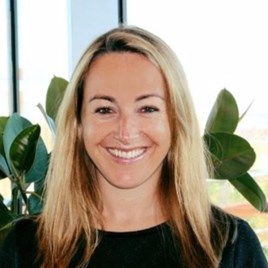 Rising overheads, increased competition, sourcing the right stock, Government policy and Brexit are all set to impact car dealers in 2019, according to responses to the CarGurus One Voice Report.

The digital marketing specialist’s inaugural car dealer survey drew insight and opinion from a cross-section of 400 franchised and independent retailers to gauge the mood of the sector as it entered another year which is set to throw-up numerous political and economic challenges.

CarGurus’ vice-president of European sales, Wendy Harris, said it was clear from the results that the challenges dealers are facing are “split into two main categories”.

“First, there are factors which are out of their control, such as Brexit and the ensuing wider economic uncertainty. Second, there are elements where they have direct control and can adapt their business strategies and operations accordingly,” she said.

“Used car dealers indicate that stock will continue to be a major pressure point in 2019. This relates to availability, quality, and the right mix of powertrains, with EVs playing an increased role. This will be even more pronounced amongst independents as OEMs look to keep even tighter control on stock.

“In addition, the continued uncertainty of Brexit and the fears of interest rate rises remains the background noise to the market in 2019.

“The net effect is a continued squeeze on margins. As a result, investments from stock mix to new digital tools or products will all need to stand up to greater scrutiny and ROI analysis.”

Stock sourcing to get tougher

Finding and acquiring used vehicles in the right condition at the right price proved more difficult in 2018 for 80.8% of dealers, according to the One Voice survey, with almost half of those who encountered stock sourcing issues stating that they had found the market ‘very’ or ‘extremely difficult’. 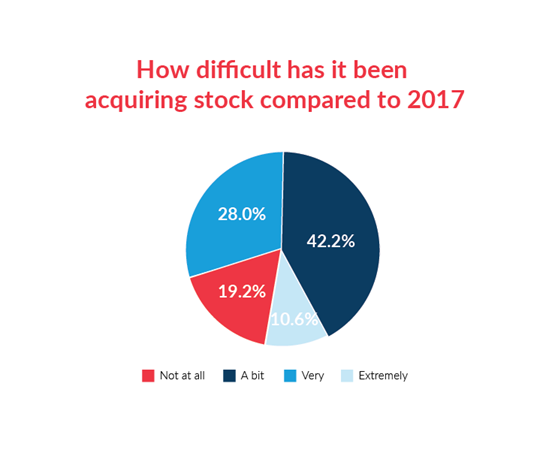 Worryingly, a third of those who found sourcing to be ‘a bit, very, or extremely difficult’ in 2018 expect the problems to worsen in 2019, and more than a quarter of all dealers expect sourcing to be more difficult in 2019 compared to 2018.

Imperial Car Supermarkets operations director Neil Smith said: “What we have seen is more used cars are being retained now in the manufacturer networks, so supply for us is reducing.

“Leasing companies have had to extend their terms primarily down to the impact of Worldwide Harmonised Light Vehicle Test Procedure (WLTP) and the lack of new cars available from certain manufacturers.

“As a result there is less supply in the market for two to three-year-old lease cars, which is what we are looking for. That does push the cost up, especially in January, which inevitably means margins are under further pressure.”

CarGurus said that it expected profitability for used car dealers to level out in 2019, rather than keep falling.

The number of respondents who expected a fall in margins next year dropped to 26.1% compared to the 43.8% who saw margins fall this year. 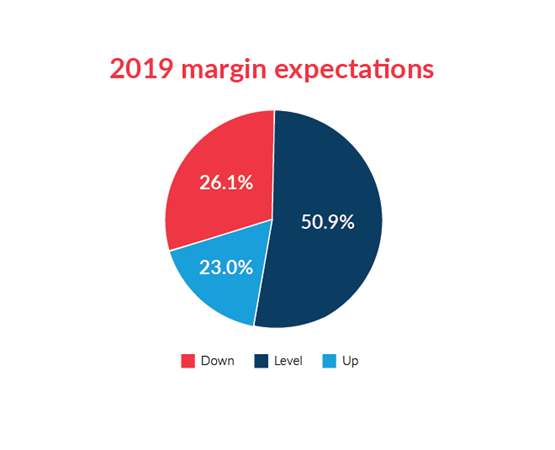 CarGurus said that almost three quarters (73.2%) of used car dealers have already adopted advanced digital practices in a bid to improve their performance.

Looking to the trends of 2019, by the end of the year almost all of the retailers surveyed will have adopted the ability to offer online trade-in valuations, with more than 60% already offering it and nearly 30% planning to offer it in 2019, it said.

On a similar note, online finance completion should be at or near 100% saturation by the end of next year, the survey added.

Efficiency gains were also expected from the introduction of chatbots.

“I think people might start using them instead of having dedicated personnel to reply to chats,” said Catherine Oldfield, digital marketing specialist at Mike Brewer Motors. “It is automated messaging: instead of answering live chats our salespeople can be used on other things.”

While 31% of used car dealers surveyed by CarGurus had not changed their stock mix as a result of the “demonisation of diesel”, 57.3% had either increased the petrol mix or decreased the diesel mix on their forecourt. 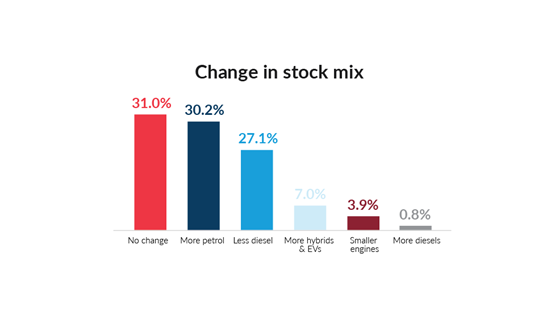 To this, it’s possible to add the 7% that have stocked more hybrids and full electric vehicles, and the 3.9% that have taken on more smaller-engined cars to arrive at 68.2% of dealers that have adjusted their stock to reduce their reliance on diesels.

Mark Hannon, used car manager at Sandown Group, said: “The balance has been struck and certainly for high mileage users, diesel is there. In our brand , the range anxiety I think with regard to electric and hybrid cars is becoming better.

“People are actively swerving , and they would rather either buy a very good petrol or a very good diesel.”

To view the full GarGurus survey visit the CarGurus website.