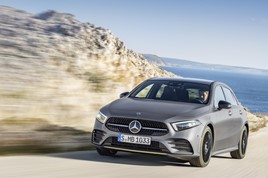 The Mercedes-Benz A Class hatchback disrupted the recent dominance of SUVs in Indicata’s monthly fastest-selling cars rankings during July.

As the average days to turn slackened to 47 days – its longest since January, according to Indicata – the German premium hatchback broke an SUV-dominated run in the top ranking during 2019.

Neil Gilligan, national business development manager at Indicata UK, said: “The market in 2019 has, to date, been dominated by two key factors – petrol powertrains and SUVs.

“However, with the Mercedes-Benz A Class petrol hatchback topping the fastest-selling used vehicle data in July that has seemingly now changed.”

Used A-Class models sold for an average of £22,016, marking July the first month in which average used prices have exceeded £20,000 this year, with sold stock volumes also reaching their second highest level during the past seven months at 97,170.

Indicata said that the uplift in sold volumes had been enabled by high levels of available dealer stock within the market following March’s plate change and the general growth in the used vehicle market off the back of record new car sales in 2016.

The monthly fastest-selling used car data report also revealed the clear dominance of petrol as the ‘go to’ fuel-type for used buyers since the turn of the year.

Indicata said that both the increase in average price and sold volumes were strong indicators of high demand and quality stock within the used market as consumers seek alternatives to buying new as economic uncertainty reverberates across the UK.

Earlier this week the Society of Motor Manufacturers and Traders reported that the UK’s used car market has started to show signs of a slowdown as volumes dropped by 2.8% in Q2 this year to 2.03 million. YTD volumes have fallen by 1.7% to 4.05m, it said.

But Gilligan said that Indicata’s findings, and June’s 1% rise in the volume of point of sale (POS) consumer new car finance recently reported by the Finance and Leasing Association (FLA), should be a source of positivity for car retailers.

He said: “For the first time this year the average value of the fastest-selling used car has surpassed £20,000, while sold stock volumes rose.

“This, aligned with FLA’s research findings, serves to highlight the strength of the used market, despite the annual summer slowdown impacting average stocking days.

“The market will settle back into its usual ‘post-holiday’ rhythm in late September however the continued impact of political instability in light of Brexit is likely to have an impact, particularly the new market – the true extent of which is yet to be realised.”