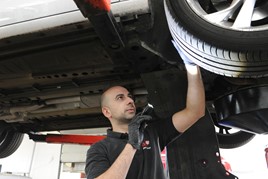 More than three quarters (78%) of motor trade businesses located in the North East have revealed that they recruited under-qualified technicians in a bid to plug the sector’s skills shortage.

Ingenia Recruitment gathered survey responses from 60 business managers in the region to compile its annual report on the motor trade’s recruitment challenges and found that many were being forced into talking short cuts to keep their businesses running.

The resulting report, entitled ‘The North East Motor Trade: A Parlous State’ showed that 78% of managers had experiences difficulties recruiting staff over the course of the past 12 months, with 49% of respondents citing a shortage of technical staff.

But a need for staff to man workshops has clearly created a climate where a potentially damaging compromise can exist.

At a time when vehicle technology is growing ever more complex – with the widespread roll-out of alternative fuel vehicles  (AFV) and Advanced Driver Assistance Systems (ADAS) – 78% conceded that they had recruited job candidates with “lower skills or qualifications than they would have liked” rather than recruiting no-one.

He said: "Today you can’t look at a vehicle and say ‘I know how to repair that because I repaired something similar yesterday’."

Commenting on the survey’s results, Ingenia Recruitment said that there are now two major issues impacting the future workforce – investment from business and sourcing enough and better educated, practical young people out of education.

It said: “It is now a matter of extreme urgency that the industry acts to stop the situation from getting even worse.”

Ingenia Recruitment added: “Whichever way you look at it, many motor businesses around the region are affected by serious recruitment issues.

“Such shortfalls can lead to reduced turnover, workshop lead times going up, higher than average overtime costs and CSI issues.”

The report suggested that businesses in the motor trade should be investing more heavily in apprentices in an effort to plug the skills gap and encourage a new flow of talent into the sector.

It said that, if action was not taken, the result would be an increase in mistakes in workshops, reduced customer satisfaction, wage increases, increased recruitment fees, an increase in the number of ‘job hopping’ technicians and non-productive empty ramps.

However, only 29.5% of respondents said that they had recruited an increased number of apprentices during 2019, with 17.5% stating that their recruitment of apprentices had actually declined in the period.

Ingenia said: “Even if the industry is having a hard time, things will get even harder with no-one to repair vehicles.

“Apprentices need to be a key part of any business’ future strategy.”