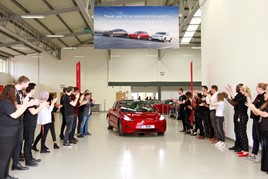 The 29.4% decline in 2020 represented, according to the Society of Motor Manufacturers and Traders (SMMT), £20.4bn in lost turnover.

The sales chart for the month of December looked like someone got drunk at Christmas and messed up all the figures for a laugh. A year ago, a forecast that the Tesla 3 could be the UK’s best-selling model, or the electric VW ID3 could be at No. 4, would have been career-threatening for an industry analyst.

Overall, battery electric vehicles (BEVs) took 16.5% of the market in December, with hybrids taking another 12.9%.

These bizarre figures were mostly due to a rush by the manufacturers to register enough electric vehicles to get their fleet average CO2 figures under the targets set by the EU: the overall target was 95g/km of CO2, but each manufacturer had an individual target anywhere from 85g/km to 110g/km, depending on the average weight of their cars. 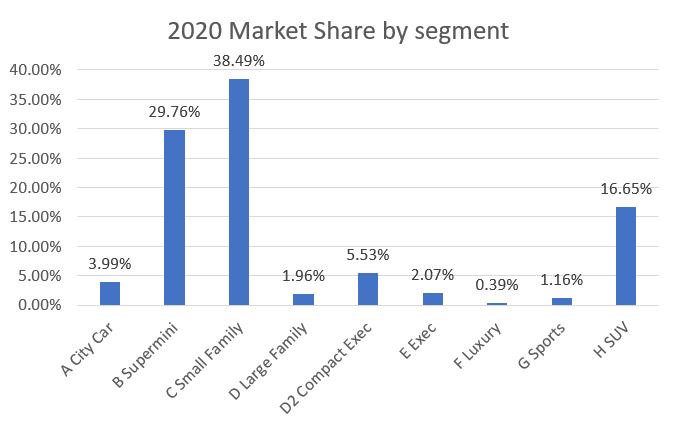 However, the strange figures for sales of individual models did not affect the trends for segments.

The consolidation in the market accelerated last year with a record 84.9% of registrations coming from just three segments – supermini, lower medium and premium/large SUVs (up from a combined 81.4% in 2019).

We are now combining registrations for the two segments, given that the microscope needed to see their sales requires ever higher magnification.

Trouble ahead for Ford?

At a manufacturer level, Ford just held on to market leadership, for the 44th year, but will it make it 45 years in 2021? VW was only 4,400 units behind in 2020, and the huge success of both the Golf and the ID3 in December could be a harbinger of a very difficult year for Ford in 2021.

Just to underline its problems, Ford were one of the first companies to announce Brexit-related price rises in January. 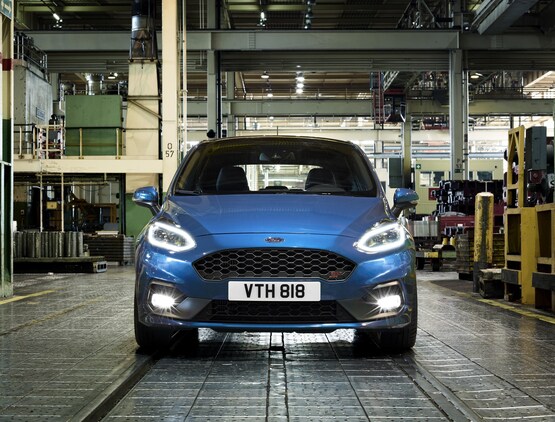 The 1.5 litre, 197bhp engine for the Fiesta ST and Puma ST are shipped from Mexico, and those two models do not meet the 55% local content requirement for free trade between EU and UK, so buyers now have to pay 10% tariffs (local content, rather confusingly, refers to parts made in either the UK or EU).

Behind Ford and VW were the now-familiar triumvirate of German premium brands.

In sixth place is Vauxhall (it still seems strange to describe what was the UK’s No.2 brand for decades in those terms).

Nonetheless, the news for Vauxhall is not all bad. The Corsa is in a strong second place in superminis, fewer than 3,000 units behind the Fiesta.

If the Corsa were to overtake the Fiesta in 2021, that really would make 2021 an annus horribilis for Ford: through the early- and mid-2010s, the Fiesta would regularly outsell the Corsa by 50%.

That is not simply of academic interest to British people.

The Astra is made at Ellesmere Port, and PSA soon has to decide whether to put a replacement model into the plant.

Given that the new Peugeot Fiat group (called Stellantis, no doubt after a vastly expensive branding review) has more EU plants than it knows what to do with, it has to be a concern that even Ellesmere Port’s home market has no interest in the product it makes.

Behind Vauxhall is the one undoubted success story of the major brands. Toyota only saw a sales fall of 12.7%, and hugely extended its lead over Nissan, despite Nissan launching the UK-made, second-generation Juke. Perhaps surprisingly, Toyota’s best performer was the Corolla, which saw registrations rise by 17.7%. 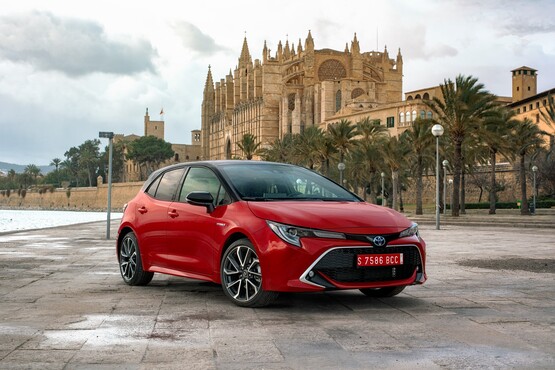 The Corolla, once a nameplate that promised nothing more than tedious reliability, is now behind only the Golf and Focus in terms of non-premium C-segment models.

Meanwhile, its long-term nemesis in the UK, Nissan, is struggling.

With the Juke having fallen from first place to third in its segment, all eyes are on the delayed third-generation Qashqai. Nissan would dearly love to pass Toyota (the UK is one of the few markets where Nissan has traditionally outsold its arch-rival), but the Qashqai will have to do a remarkable job to achieve that.

Looking forward, one of the key questions is how much of the gains made by electric cars will remain once the market (hopefully) starts to recover in 2021.

However, they have another issue to deal with. One of the lesser-known aspects of the UK/EU trade deal is that the standard 55% local content rule for cars does not apply to batteries.

The EU insisted on a clause stating that, from 2027, 70% of the battery pack, or 65% of the battery cell, for a plug-in hybrid or battery electric car has to come from either the UK or the EU.

Otherwise, UK-made BEVs and PHEVs will have to pay 10% tariffs when exported to the EU.

That means that the UK will have to build a complete battery supply chain, or import components and batteries from the EU.

It will no longer have the option of importing batteries from Asia. Possibly not what was envisaged by the slogan, “Taking back control”.