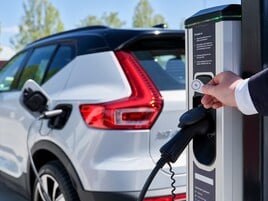 November's 115,706-unit new car market brought an end to four months of consecutive decline in new car sales, by recording a 1.7% uplift over November 2020 when stronger coronavirus restrictions were in place.

And the Society of Motor Manufacturers and Traders' data shows that plug-in cars accounted for 28% of November's new car sales.

This was despite a 24.7% drop in sales to large fleets, which meant it was private buyers who drove the market, taking a 54.1% share of sales.

Compared to the pre-pandemic average for November the month-end total remained very low. However it's a slight bounce back after a disastrous October market which was the lowest for 30 years.

Mike Hawes, SMMT chief executive, said: “What looks like a positive performance belies the underlying weakness of the market. Demand is there, with a slew of new, increasingly electrified, models launched but the global shortage of semiconductors continues to bedevil production and therefore new car registrations.

"The industry is working flat out to overcome these issues and fulfil orders, but disruption is likely to last into next year, compounding the need for customers to place orders early. 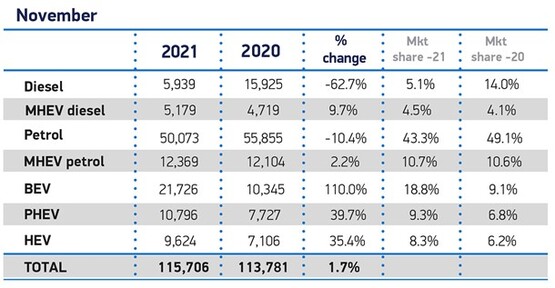 "The continued acceleration of electrified vehicle registrations is good for the industry, the consumer and the environment but, with the pace of public charging infrastructure struggling to keep up, we need swift action and binding public charger targets so that everyone can be part of the electric vehicle revolution, irrespective of where they live.”

Sue Robinson, chief executive of the National Franchised Dealers Association (NFDA), said a supressed market was "as expected" given the well reported supply constraints, but added that "the strong increase in sales to private buyers shows consumers are confident."

Robinson said motor retailers are again proving their resilience and "are communicating regularly and informatively" with their customers to manage expectations around new car deliveries.

Richard Peberdy, UK head of automotive at KPMG, noted positives from the results too. He said: "Demand for what's available, both new and old, continues to outpace car supply. That's reassuring for the industry, despite the frustration and financial challenge of not being able to increase supply to meet demand."

At Auto Trader, commercial director Ian Plummer noted that supply issues will continue well into 2022 and while electric vehicles are again a bright spot he cautioned that the current pace will not get the market to the Government's 2030 targets.

“With new EVs costing over a third more to buy than a petrol or diesel, the ‘green premium’ means current growth is being fuelled by only the most affluent.

"There are evident limits to the number of car buyers who can afford today’s EVs. Unless the Government significantly changes its approach to financial incentives - three times smaller than those available in Europe – to make EVs affordable for the average household, its green ambitions will run out of charge long before 2030,” Plummer added.