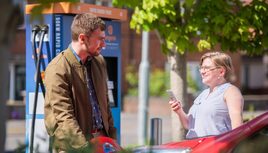 Research by electric vehicle (EV) charging app, Zap-Map, has revealed that EV drivers are ‘highly satisfied’ with their decision to purchase a zero emission car.

The results are similar to those of last year’s Zap-Map survey, indicating that this year’s influx of new EV drivers are as pleased with their decision to make the switch to electric as their 2020 counterparts, said Zap-Map. Many of the respondents to the survey were first-time EV drivers.

More than 48% of respondents said that their current vehicle was their first EV, with 28% making the purchase in 2020. 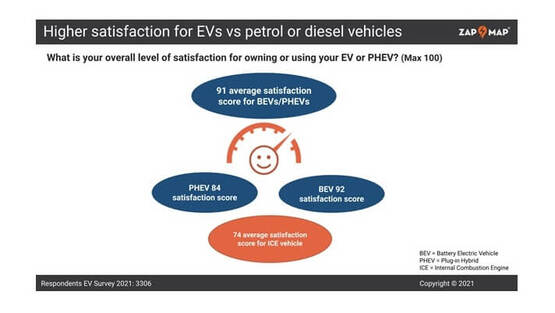 Transport minister Trudy Harrison, said: "These survey results show that drivers are becoming increasingly confident in making the switch to electric vehicles and I hope this data encourages others to consider going electric as we work towards the UK's ambitious net-zero targets.”

The Government’s latest cuts to the PiCG could derail car retail’s decarbonisation efforts and will impact less affluent EV buyers most, the National Franchised Dealers Association (NFDA) has said.

The supply of new EVs to UK dealers is under threat due to a lack of financial incentives, when compared to other European Countries, Auto Trader has warned.

The research also highlighted EV driver confidence in long journeys; most respondents (53%) said they have driven more than 200 miles in their EV in a single trip.

Almost a quarter of respondents (24%) said they have driven more than 300 miles in one trip – with over 7% doing the long haul and driving more than 500 miles in a single journey.

The latest Society of Motor Manufacturers (SMMT) figures show that battery-electric vehicles (BEVs) accounted for 18.8% of all new car sales in November, a growth of 110% compared with November 2020 when the figure was 9%.

Melanie Shufflebotham, co-founder and chief operating officer at Zap-Map, said: “As we move from the early adopters into mass EV adoption, the evidence in favour of electric vehicles grows more compelling every year.

“The findings of this latest poll certainly give prospective EV buyers something to think about in 2022. For the second year running we’ve seen that those who make the switch to electric simply don’t look back.

“It’s also clear from the distances EV drivers have travelled that concerns over range and other historical challenges of owning and running an EV are increasingly a thing of the past.”

The poll – which was carried out in November 2021 and gained more than 3,000 responses from Zap-Map’s community of EV drivers – is part of the company’s annual EV charging survey of EV drivers in the UK.