Urgent action is needed to protect the UK car manufacturing sector after production volumes slumped 32.4% on a COVID-impacted 2021, according to the Society of Motor Manufacturers and Traders (SMMT).

The sector’s March output delivered a 33.4% decline (to 76,900), its weakest performance since 2009 resulting in a Q1 production volume of 207,347 as the ongoing global shortage of semiconductors and other components dashed any hope of recovery. 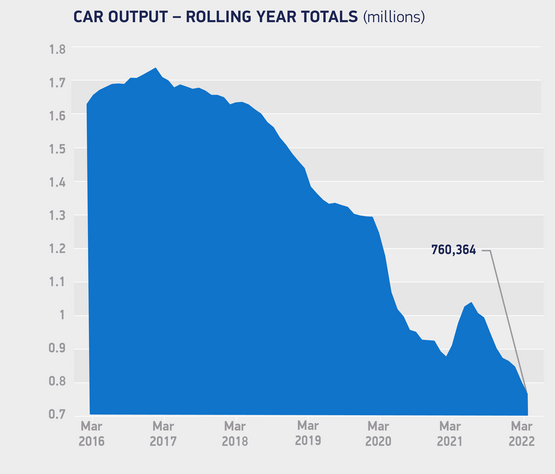 “Recovery has not yet begun and, with a backdrop of an increasingly difficult economic environment, including escalating energy costs, urgent action is needed to protect the competitiveness of UK manufacturing.

“We want the UK to be at the forefront of the transition to electrified vehicles, not just as a market but as a manufacturer so action is urgently needed if we are to safeguard jobs and livelihoods.”

AM recently reported on the impact of Russia's invasion of Ukraine on an automotive recovery from COVID-19 and its current supply issues.

The SMMT wants more practical help from Government, however.

It is calling for relief on energy costs equivalent to that afforded energy intensive industries and access to low cost and low carbon energy, comparable to European competitors, stating that these measures will “ensure the UK remains a competitive environment in which the latest and greenest vehicles can be ‘Made in Britain’”. 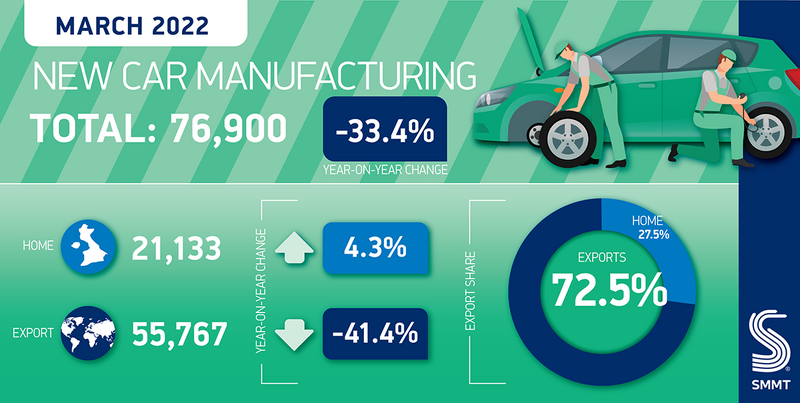 SMMT data showed that exports to the US saw the greatest decrease during March, dropping by -63.8% year-on-year, largely due to the closure of Honda’s Swindon plant in July 2021.

Production for the domestic market increased 4.3%, equivalent to 864 additional units.

Knight said that prioritising available components and materials into higher-margin vehicle production and sales had been to the detriment of some parts of the fleet industry.

He added: “With rental and leasing markets beginning to recover as travel and commuting again increases, leasing companies will be looking at which manufacturers have, and haven’t, supported them during these challenging times.

“An increase in hybrid working may of course change the nature of company car schemes forever and lead to less miles driven, but in turn it could drive more consumers, whether supplemented by a vehicle allowance or not, to look at rental options as an alternative to ownership.

“This was a trend we were already seeing pre-pandemic, particularly in urban areas and amongst younger consumers. And the tightening cost of living squeeze will only increase the number of people assessing whether short- or medium-term rental or leasing is a more affordable model for them than buying a vehicle.”