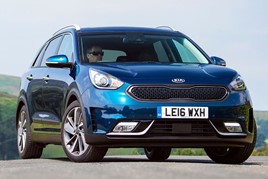 Kia has recalled more than 5,000 Niro hybrid and plug-in hybrid models due to an electrical relay that could overheat.

Affected versions of the crossover alternative fuel vehicle (AFV) - those built between November 2016 and September 2017 - will be inspected at dealerships and the faulty relays will be replaced at no cost to customers.

The fault was identified as part of Kia’s on-going research and development programme.

A recall for a similar fault was issued in the USA in October, where 27,000 vehicles were deemed to be at higher risk of fire, the Korean manufacturer revealed in a stsment issued today (May 31).

Kia Motors UK stated that it is not aware of any failures causing fires nor of any injuries but is undertaking the recall to ensure the issue is swiftly corrected.

Chris Lear, director of After Sale at Kia Motors UK, said: “The safety of our customers is our number one priority and we are taking this action to ensure their vehicles are not affected in any way.”

Kia said it will contact all affected owners, but urges anyone concerned about their vehicle to contact Kia Customer Services.