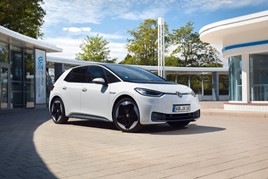 Volkswagen’s new ID3 was the best-selling electric vehicle (EV) across Europe in October 2020.

The newcomer overtook the Tesla Model 3 in the sales charts, complied by Jato Dynamics.

In September, electrified cars achieved a greater market share than diesel cars for the first time and that trend continued in October.

According to Jato, the Volkswagen ID3 owes much of its success to businesses and fleets, with more than half of registrations coming from buyers in these areas.

Felipe Munoz, global analyst at JATO Dynamics said: “Similarly to the demand seen for the Tesla Model 3, the Volkswagen ID.3 is another example of how appetite for competitive and stylish electric cars continues to grow day by day.”

As a result, Volkswagen Group became Europe’s biggest producer of EVs in October, comprising of 25% of the market registrations.

Munoz added: “Volkswagen Group is catching up to its peers at great pace, in part due to its strong presence in Northern and Central Europe, where appetite for EVs continues to grow.”

The VW Golf was the best-selling car overall in October, amassing 27,530 registrations across Europe.

By model rankings, the Opel/Vauxhall Corsa performed well in October, becoming the third best-selling car in Europe for October and the year-to-date. Strong growth was also posted by the Renault Clio, Fiat Panda, Peugeot 2008, Hyundai Kona, and Volvo XC40. The Ford Puma continued to climb up the rankings, becoming the fifth best-selling SUV with 14,430 units registered in October.

VW to open order books for ID 3 EV in Europe

VW to open order books for ID 3 EV in Europe