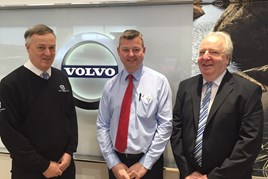 A pair of long-serving Ray Chapman Motors employees are set to retire from the Malton and York dealerships at the end of March following 35 years of success with Volvo.

John Milburn and Mick Talbot (pictured) will hang up their Volvo badges at the end of March following award-winning tenures in the service and parts departments at the family-run Yorkshire dealership.

Milburn joined Ray Chapman Motors in April 1981 as a motor technician at the former Horsemarket Road site, quickly progressing to service advisor, before taking the reins of the Malton site’s Service and Repair department, a position he has held for the last 23 years.

Following a brief illness in 2015, however, Milburn took the difficult decision to focus on enjoying life outside the workshop.

Talbot joined Ray Chapman Motors in 1978 as a parts assistant, also at the former Horsemarket Road site, returning in 1981 alongside Milburn to manage the Malton Parts department.

After the dealership’s second site opened in York in 2000, Talbot was charged with developing the service department and was appointed as York aftersales manager.

Talbot was awarded with Volvo’s National Service Manager of the Year accolade three times and the Volvo National Parts Manager award once.

Duncan Chapman, dealer principal of Ray Chapman Motors, said: “Both John and Mick’s retirements are a huge loss to the company. Their steadfast commitment and attention to detail in providing outstanding levels of care and attention for our customers has been evident throughout their time with us.

“To say they will leave some big boots to fill is an understatement, but we have had a year to put a new structure in place and we know the team they leave behind will continue to fly the flag for outstanding customer service.

“On behalf of everyone at Ray Chapman Motors, I wish them both a healthy, happy and long retirement.”

Milburn and celebrated their impending retirements at a party in the company of the dealership’s former and current staff, partners and family.

The two retirees were also presented with commemorative, engraved wine decanters by Ray and Duncan Chapman.