TrustFord has announced the appointment of Stuart Foulds as its new chairman and chief executive officer after predecessor Steve Hood took a permanent post in Asia.

Hood had been operating as vice president of sales, Asia Pacific, alongside his post within Trustford since October last year.

Foulds now assumes responsibility for leading the TrustFord business, which covers 60 dealer sites across the UK and Channel Islands, and includes TrustFirst Parts.

“I am delighted to join the TrustFord team at what is a very exciting and transformational time for the industry,” he said.

“TrustFord is a fantastic dealer group with a clear track record of delivering exceptional results, and I look forward to continuing the momentum set by Steve and the team.”

Roelant de Waard, vice-president marketing sales and service, Ford of Europe, said: “We are delighted to welcome Stuart to the Ford team after a great track record of leadership within the dealer body and many years of service at Evans Halshaw, and his help and counsel on the FDC.

“We have future plans for TrustFord and are excited to see Stuart driving those forward.” 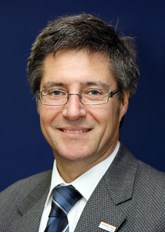