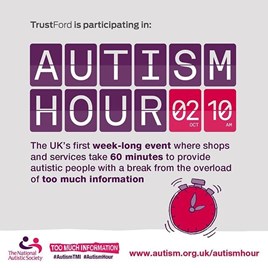 TrustFord helped to raise awareness and understanding of autism through its participation in Autism Hour.

TrustFord joined other major taking part in the National Autistic Society’s nationwide initiative on October 2, becoming the “first and only automotive company to do so”.

Research from the National Autistic Society has shown that 64% of autistic people avoid going to the shops as they find the noise and light overwhelming, as well as feeling socially isolated due to a lack of public understanding of autism.

TrustFord dealerships made changes to their environments to make them more accessible to customers with autism.

These included: turning down music and other noise such as tannoy announcements and workshop noise; dimming dealership lights; and training staff in how to best serve customers with autism.

Madge Pattison, a TrustFord customer, has first-hand experience of the challenges a simple trip to the shops can present for those with autism, such as her eight-year-old granddaughter.

“Last week whilst shopping, the fire alarm went off. It was awful for her and it took her the rest of the day to calm down,” said Pattison.

Following the event, Madge thanked TrustFord colleagues for their work in making the dealership environment so welcoming for those with autism.

These, in conjunction with TrustFord’s long-running participation in the Motability car scheme – designed to provide cars and powered wheelchairs to disabled customers – are just some of the ways in which TrustFord continues to drive the standard in customer care.