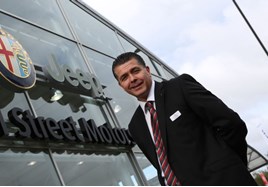 Tributes have been paid to Vertu Motors’ project general manager and “number one Alfista” Dax Pearce following his death earlier this month.

Former colleagues flocked to social media platforms to share their memories of the former Lookers, Benfield and Reg Vardy employee who was branded “an inspiration” by many who paid their condolences after he passed away on March 6.

Mourners gathered for a funeral at Lytham Park Chapel, near Blackpool, to pay their respects to the car retailer, who was renowned as a fan of Alfa Romeo cars, on March 16.

Latterly Vertu Motors’ project general manager, a role he secured following a period as a general manager of the AM100 group’s FCA Group multi-franchise site in Newcastle, Pearce’s death attracted tributes from across the automotive retail sector.

“He was a true brand advocate for Alfa Romeo and I remember him looking at reg numbers of Alfas coming in for service and him knowing the history of the cars’ ownership.

“His passion for what he did was infectious to everyone who came in contact with him. He will be missed.”

A spokesman for the Alfa Romeo brand said: “Alfa Romeo would like to pay its respects to one of the longest serving and well respected Brand Ambassadors in the network, Dax Pearce, who sadly passed away earlier this month.

“In memory of the No 1 True ‘Alfista’, Dax lived life to the full, with incredible passion, tenacity and commitment to everything he undertook. Always striving to be the best at everything he did.

“He will sorely missed by everyone at Alfa Romeo.”

Like many former colleagues, Matt Costello, general sales manager at Springfield Motor Group, took to LinkedIn to pay tribute to Pearce. He said: “Today we paid our last respects to the most respected, professional and organised man we knew. It truly was an honour and a privilege to work with you, life genuinely is too short. Rest in peace, boss.”