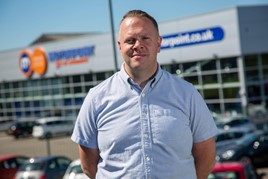 Motorpoint Birtley’s general manager Richard Start will be expected to hit the ground running after joining the used car supermarket group from the hospitality sector.

Start has previously worked for the Spirit Group and Greene King pub chains but will be leading a team of 50 in the car retail sector after joining the ID50’s top placed used car supermarket operator at the County Durham facility, which was opened in 2015.

“We have a fantastic team on site giving us the perfect platform from which to further establish ourselves as the North East’s Car Buyers Champion offering award-winning levels of choice, value and service to our customers.”

Start’s appointment comes just weeks after the branch adopted a new charitable partner for the next 12 months – the Sir Bobby Robson Foundation.

The team, who have worked previously with St Oswald’s Hospice and the Solan Connor Fawcett Family Cancer Trust, are already busy working with the Foundation identifying future fundraising opportunities.

“We’re thrilled to have partnered with the Sir Bobby Robson Foundation” said Richard, a keen amateur footballer. “We look forward to working closely with the team at the charity to help support their pioneering work in cancer research.”

Last month Motorpoint revealed that its annual financial results for the period to March 31, 2019, had delivered 6.8% turnover growth and 10% growth in profit before taxation and exceptional items.

Revenues rose to £1.06bn and pre-tax profits before exceptional items to £22.9m in the period as it prepared to expand into the 13th site in its national retail network.

Chief executive, Mark Carpenter, said that he was pleased with the progress that has been made over the course of the year, which had led to the group achieving sales of over £1bn for the first time.