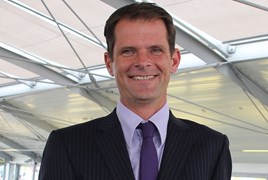 Group 1 Automotive has parted company with its managing director Darren Guiver after the Spire Automotive founder decided to "take time away from the business”.

Guiver was appointed as managing director of the UK operations of the AM100’s ninth-ranked franchised retail group by turnover back in March 2018 and had worked for Group 1 in the UK since February 2016 when the US-based operation acquired his dealer group, Spire Automotive.

But speaking to AM today (November 21), Guiver said that he simply wanted to step away from the business to spend “quality time” with his family.

“I just wanted some quality time for myself and my family,” he said. “I have enjoyed every minute of working with Group 1 and (president and chief executive) Earl, but the time has come to take some toim to step back and do some of the things I want to do.”

Guiver said that the challenges of the current climate had nothing to do with his decision. He said: “Not at all. I’ve never felt under any pressure. I’ve been in a position where I haven’t had to work for financial reasons, I’ve been here because I love being part of the business, but the time just feels right to take some time away.

“The group has just acquired a new head office and will be centralised there and it’s in good shape. It’s great to leave at a time when you know that’s the case.”

Speaking at the time of his appointment to the post of MD in the UK, Group 1 Automotive president and chief executive, Earl J Hesterberg, had said: ““Darren is a highly experienced retail operator with a proven track record of success.

“My top management team and I have complete confidence that Darren is the right person for this role. He and I have been working together almost daily for the past two years so we expect this transition to be seamless.”

Hesterberg himself had taken over the operation of Group 1’s UK business operations in November 2017, stating in a comment to analysts at the time that he wanted to get the business “structured properly”.

In recent months Guiver has overseen growth of the Group 1 portfolio in the UK.

In March 2018 it added turnover of around £180m with the acquisition of Robinsons Motor Group’s Mercedes dealerships in Peterborough, King’s Lynn, Norwich, Cambridge and Bury St Edmunds.