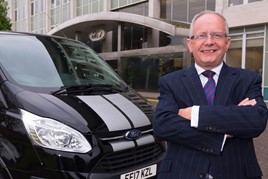 Ford of Britain sales director Lisa Brankin will step into a role as the brand's acting managing director after Andy Barratt took a ‘leave of absence’ from his post.

AM understands that retailers throughout the Ford’s UK franchised retail network were made aware of the changes in a memo from the brand this week.

And a statement issued to AM by Ford this morning confirmed the changes.

“Lisa Brankin has been named as acting managing director of Ford of Britain and Ireland, effective October 1,” it said.

“The appointment is being made as the current managing director, Andy Barratt, takes a temporary leave of absence.

News of Barratt’s departure from his Ford of Britain role comes the day after new Ford Motor chief executive Jim Farley made a series of senior leadership changes within the Blue Oval.

A spokesman for Ford of Britain insisted that Barratt’s ‘leave of absence’ had “absolutely no connection to those changes”, which had been clearly laid out by the OEM.

He added: “Andy Barratt has been with Ford for 40 years and continues to be 40 years at Ford.”

The Detroit Free press reported that, at 8am yesterday, Ford had announced "operational and leadership changes" designed to do what Farley has promised publicly: drive growth and speed transformation of the 117-year-old automaker.