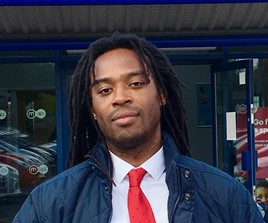 Motorpoint has promoted Isaac Barrett into the role of sales manager at its Oldbury used car supermarket site.

Barrett has worked for the UK’s largest independent car retailer in a variety of sales roles for five years, most recently as sales controller at Motorpoint Birmingham.

He will oversee the day to day running of the branch in the West Midlands.

His arrival at Motorpoint Oldbury follows the recent appointment of Kevin Cartwright as general manager.

Motorpoint Oldbury, which is located close to J2 of the M5, opened its doors to the public in July 2016 after a multi-million pound investment in the former Car Select site as part of its drive to increase its presence in the West Midlands.

It already has an established site at Aston Cross in Birmingham which opened in mid-2013.

Cartwright, general manager of Motorpoint Oldbury, welcomed Barrett to the senior team at Oldbury and addded: "I look forward to supporting him as he takes the next steps in his leadership career at Motorpoint.”