A lack of opportunity has been highlighted as a key issue for women pursuing a career in the automotive sector, with 57% failing to see a career path to their desired post and 42% perceiving a bias towards men.

Car dealership employees were among the 110 women surveyed as part of Deloitte’s Women in Automotive Industry research paper, which was conducted between June and September and concluded that the automotive industry “remains behind many other industries” in terms of diversity. 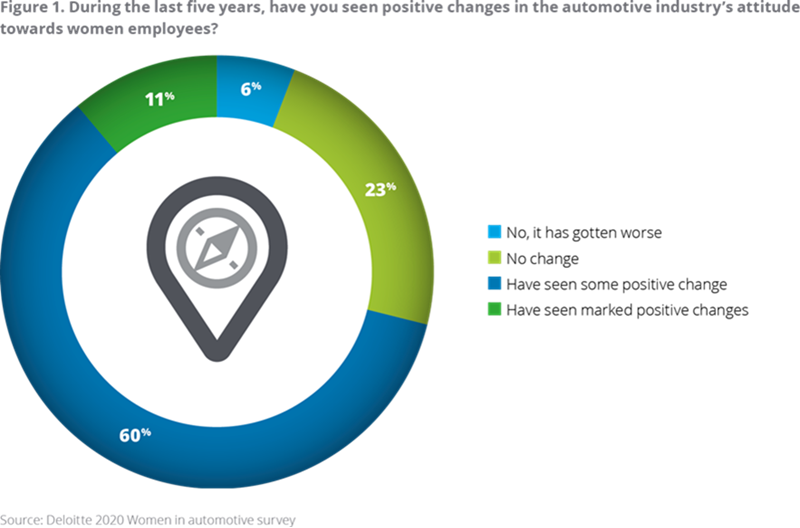 Although 68% of respondents that that they had seen a positive change in the automotive industry’s attitude towards women employees in the last five years, 40% said they would choose a different industry if they could go back and 50% revealed they would leave the industry altogether due to lack of promotion opportunities, organisational cultural norms, poor work-life balance and an uncertain industry future;. 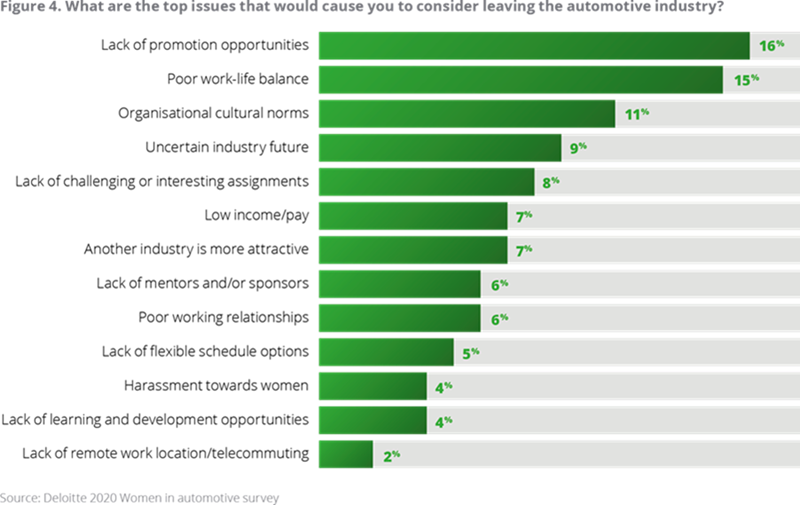 Sarah Noble, Deloitte automotive director and founder of Women at the Wheel UK, said: “The long-term success of any company requires a strong focus on people, yet the automotive industry remains behind many other industries when it comes to gender diversity.

“Women currently only represent 20% of the automotive workforce, dropping below 10% at executive level.

“Our research found that the majority of women have seen positive changes in attitudes towards female employees over the last five years. However, under-representation at a leadership level is still strongly felt.”

Noble added: “In a predominantly male industry with few female role models at the top, male allies remain critical to the success of gender diversity initiatives.

“Likewise, we know that a lack of promotional opportunities, poor work-life balance and organisational cultural norms are the top factors that would cause a female employee to leave the automotive industry.

“The COVID-19 pandemic has accelerated trends that were already emerging: normalising flexible working and bringing greater awareness around caring responsibilities.

“As automotive companies embrace these changes on a more permanent basis, it is also clear that gender diversity can also help gain competitive advantage.

“Focussing on recruitment, retention and opportunity will be key to making long-term change possible.”

The findings of a survey of AI learning platform Soffos.ai, published this week, found that a third of workers fear that COVID-19 has set back their professional development.

The survey of 2,000 working adults showed that 36% of those in full-time employment feel their professional development has regressed due to COVID-19, with 28% due a promotion in 2020 that has now been put on hold.

While training has been permitted under the Government’s furlough scheme, 46% said that they have received no professional training from their employer during the pandemic, meanwhile.

Nikolas Kairinos, the chief executive and founder of Soffos.ai, said: “COVID-19 has presented a myriad of challenges for businesses to contend with, so it’s not altogether surprising that professional development initiatives have fallen by the wayside.

“However, as they adapt to the ‘new normal’, it’s time they refocus on providing better training and support to employees.

“Just as if they were in the office, business leaders must provide team members with ample opportunities to develop their skills and understand how their industries are evolving.

“If they don’t, they risk creating a skills gap that will stunt both their employees’ and organisation’s growth.”