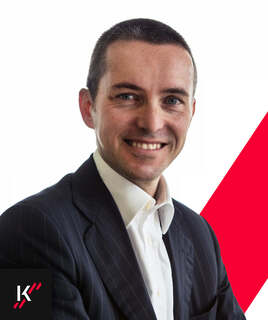 Servo most recently served as CFO of DentalPro and a portfolio company of BC Partners, where he led the company through various transactions, including the recent acquisition of the Italian business of Vitaldent, said MotorK.

MotorK said Servo's expertise will be "invaluable" to the company as it gears up for its next phase of growth.

“Andrea is a highly regarded finance leader who brings deep public company experience, and we are delighted to welcome him to MotorK,” said Marco Marlia, chief executive officer of MotorK.

“He has a proven track record of growing companies through organic and inorganic strategies, overseeing successful roll-ups in his previous roles, as well as building excellent teams within private and publicly-traded companies.

"Andrea’s expertise will be invaluable to MotorK as we gear up for our next phase of growth.”

Founded in late 2010 and backed by leading investment firms 83 North and Zobito, MotorK claims to be a partner to more than 90% of car brands in the European marketplace and delivers retail-led web sites to manufacturers and dealer groups.

MotorK announced an £8m round of initial funding in 2017.

Between 2013 and 2016, new recruit Servo was CFO of Seat Pagine Gialle until its merger with Italiaonline, where he led the structuring and execution of M&A and other transactions domestically and internationally.

In his role, Servo also oversaw corporate compliance, the organisation of board meetings and AGMs, and relations with the capital markets regulator and Milan Stock Exchange.

He joined Seat Pagine Gialle in 2000 as group tax manager before serving as the company’s chief accounting officer from 2008 until 2013.

Servo also holds a bachelor’s degree in economics and business from the University of Turin and is a chartered auditor and accountant in Italy.

Commenting on his new post with MotorK, Servo said: “I am thrilled to be joining MotorK at such a critical time in the company’s evolution.

“I have long admired MotorK as an industry leader in Europe and a frontrunner in innovation and look forward to joining the team as we enter this exciting new phase.”

Finance must not prove a hurdle for tech-savvy online car buyers, opinion

Finance must not prove a hurdle for tech-savvy online car buyers, opinion