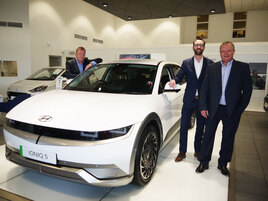 The group is restructuring its sales operations and expanding its senior management team to deliver a new growth plan that is targeting a 70% increase in turnover, to reach £200 million by June 2025.

Motorvogue currently represents 10 brands - Abarth, Alfa Romeo, Cupra, Dacia, Fiat, Fiat Professional, Hyundai, Jeep, Renault and Seat - from its 27 retail showrooms. By May 2023, it plans to expand to 35 retail points, in part through the addition of a further three franchises: Peugeot, DS and Citroen.

Guy Twiselton re-joins the Group from Endeavour Automotive, where he was Volvo and Polestar franchise director. He will lead the new Midlands and Cambridgeshire division.

Twiselton joined Motorvogue in 2002, as a sales executive, and over eight years worked his way up to sales manager before leaving the company in 2010. He’s also held senior management roles within Rockar, Marshall and Ridgeway.

Simon Taylor will lead Motorvogue’s Norfolk and Suffolk division. He joined as group sales director in September 2021, after being recruited from Cheshire-based Mangoletsi where he was Head of Business for more than 10 years.

He said: “To meet some very ambitious growth targets, while at the same time safeguarding quality of service for customers, it became clear that we needed to de-centralise some of our key management functions.

“Our strategic focus will remain on delivering improved returns from a multi-franchise retail model. That’s already a differentiator for us in key areas and, with fresh investment and a renewed momentum behind our recruitment efforts, we are now better able to scale that approach into new territories and with new brands.”