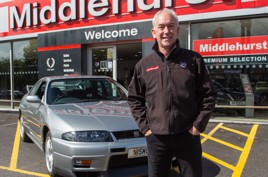 Nissan GB authorised repairer Andy Middlehurst will take on the stopwatch at the Goodwood Festival of Speed’s infamous hillclimb course in a flame-throwing Skyline GT-R R32.

The former British Touring Car Championship (BTCC) Nissan works racing driver, who is now the managing director of Middlehurst Nissan in St Helens, Merseyside, will take to the wheel of the legendary performance car – nicknamed ‘Godzilla’ – at the showcase event this coming weekend.

And he is looking forward to the experience, despite the daunting prospect of taming a car emitting over 1,000PS through all four-wheels from its 2.6-ltre, twin-turbocharged engine.

‘‘It’s certainly a quick thing,’’ said Andy, 59, of the car that is said to reach 62mph in under three seconds. ‘‘Flames come out of the exhaust and it makes an incredible noise. It should prove to be quite a spectacle.’’

Middlehurst’s authorised car repair business has been connected to Nissan since 1980 and a GT-R performance centre remains a key part of the business.

His love of racing also remains very much intact.

After starting in motorbikes, Andy moved to single-seater in Formula Ford before becoming a works factory Nissan driver in the British Touring Car Championship in 1992.

In 1993 he started competing in the National Saloon Championship, winning four back- to-back titles.

During this year’s the Goodwood Festival of Speed (June 23 to 26) Middlehurst will be tackling the Hillclimb on behalf of Ric Wood Motorsport, a specialist in the design, development and construction of race-winning cars, engines and components.

And he is hoping to qualify for the event’s ultra-competitive ‘Sunday Shootout’ after securing the Glover Trophy an incredible seven times at the Festival of Speed’s sister event, the Goodwood Revival.

Middlehurst said: “Motorsport has been a big part of my life for decades. I have been lucky to have some wonderful experiences and can’t wait for the Festival of Speed to come round.”