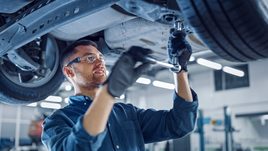 A broader range of fleet sector reports has been launched by epyx in a bid to boost car retailers’ service, maintenance and repair (SMR) work.

Over 1,700 workshops are set to benefit from developments to the Network Performance and Opportunities Report system which have been implemented in response to retailers’ calls for greater insight.

Network Performance and Opportunities Report Plus (NPOR+) now offers a range of new insight, including: contract information for major fleets covering hourly labour rates; parts discounts and commission; a breakdown of SMR spending by major fleets with which the garage has preferred and non-preferred agreements; and warnings of non-compliance issues that are slowing job approval.

Fleet job approval times by average; the percentage of automated job approvals by fleet; and also information about where opportunities for maximising tyre sales have been missed are also part of the new dataset.

Ryan Wakeman, head of inside sales at epyx, said: “NPOR was launched three years ago and has proven very successful with 1,700 subscribers, 79% of which are franchise dealers and 21% independent.

“It highlights areas such as where job leakage to other SMR providers is occurring, on which types of work, where missed opportunities for jobs are happening, and also helps them benchmark their performance against recent years.

“However, there are other areas of SMR activity where workshop managers have been asking us for additional data and we are delivering this through NPOR+. It is very much a product that has been driven by customer demands.”

Based on the transactions that each garage undertakes through epyx’s 1link Service Network platform, used by major fleets to manage the SMR of four million cars, vans and trucks through franchise dealers, independent garages and fast-fits.

The NOPR and NOPR+ reports produced by epyx are based on the transactions that each garage undertakes through epyx’s 1link Service Network platform.

It claims that the platform is used by major fleets to manage the SMR of four million cars, vans and trucks through franchise dealers, independent garages and fast-fits.

“In a sector where high quality data is difficult to find, NPOR has proven itself to offer real value.” Wakeman said.