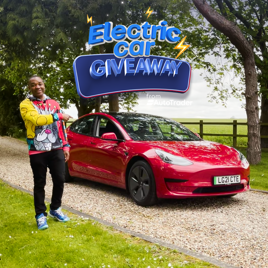 Auto Trader has given away more than £500,000 worth of electric cars in the last 12 months as part of its Electric Car Giveaway competition.

The initiative is being continued into a second year, following a “significant” boost in engagement for electric vehicles (EVs)

Auto Trader said the campaign drove more than 67m EV advert views during the year, a 59% increase on the previous year.

There’s also been a significant spike in engagement onsite, with an 87% increase in the volume of EV leads sent to retailers over the same period.

Each month, the competition was marketed heavily across Auto Trader’s channels, driving an average of 200,000 entries and over half a million-page views on the competition homepage each month.

The campaign kicked off in May 2021, with a Tesla Model 3 available to win. Since then, a broad range of premium and volume brand EVs have been given away, including a Jaguar I-Pace, Vauxhall Corsa-E, Hyundai Kona, and a Mini Electric.

Catherine Faiers, Auto Trader’s chief operating officer, said: “As part of our broader strategy to drive awareness amongst consumers, we wanted to create a campaign that would help us engage, inform and excite people around the growing range and capabilities of EVs, and importantly to drive more consumers to retailers’ electric stock.

“Our Electric Car Giveaway has achieved just that and highlights our commitment to helping both car buyers and the industry move towards a cleaner and more sustainable future.”

Auto Trader claimed that over 75% of all minutes spent on automotive classified sites spent on Auto Trader (2021: over 75%) during the reported period as it grew to be eight-times larger than its nearest competitor (2021: 7x).

Auto Trader also completed the acquisition of the car and van leasing business Vanarama during its 2021/22 period.