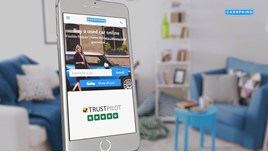 Online used car marketplace Carspring is planning to spend over £1 million to promote the business through television advertising.

The company is starting a £100,000 test campaign with Sky from Monday (August 15) for a four week period. Its advert will be shown on channels like Sky Sports, MTV, VH1 and Discovery. ​The TV ad will focus on Carspring’s offer of flexible finance, 14-day money-back guarentee and nationwide delivery.

A spokesman for Carspring said the brand has ambitions to become a household name and the plan is to invest up to £1m on its marketing campaign.

The company is expecting to sell 3,000 used vehicles this year. Carspring launched in the London in May last year and secured a 3 million Euro investment to fund expansion plans.

Peter Baumgart, co-founder and chief marketing officer at Carspring, sees TV as the best medium to help the company shift up a gear and “dominate an e-commerce gap, yet to be dominated by a universally-known player”.

He said: “TV was the next logical step in our marketing strategy. There’s no beating the silver-screen in terms of generating mass-market appeal. We’re a company firmly aimed at the mass-market, so we’re hopeful it’s going to be a great fit.”

AM Poll
How has the COVID-19 pandemic affected your attitude or mental health? Please leave a comment
Vote
View all
2040