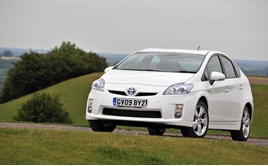 The online marketplace revealed that the 2014 Toyota Prius (automatic) was the UK’s fastest selling used car during the month, taking an average of just 14 days to sell.

It is the second time this year that the established AFV has taken top spot, following its success in February.

BMW’s i3 also became the first EV to feature in the top ten when it secured third place in the same month.

April saw Toyota in dominant form, however, with the 2012 Yaris (petrol automatic) also featuring in the top 10 list. Taking 19 days to turn, it was the UK’s sixth fastest selling used car.

It’s the second time this year that the Japanese manufacturer dominated the national list; in February the 2014 Prius and Yaris were the first and second fastest used cars to turn.

“It’s very clear the public are embracing hybrid as the solution not only to air quality issues, but also fuel economy and enhanced cabin ambience.”

In April, the 2016 Mercedes-Benz GLA Class SUV (diesel manual) and the 2016 Ford Mondeo (petrol automatic) followed the Prius to make up the top three, taking an average of 15 and 16 days to sell respectively. 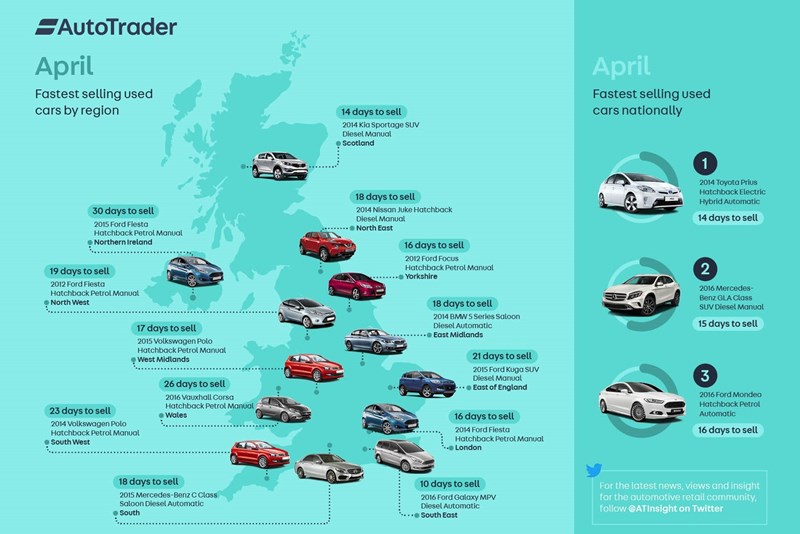 In terms of fuel types, an electric hybrid may have taken first place nationally, but it was an almost equal split for petrol and diesels regionally.

Karolina Edwards-Smajda, Auto Trader’s retailer and consumer products director, said: “As we can see from the range of vehicles making up the top 10 lists across the UK, there remains a healthy demand for all fuel types of used cars.

“Coupled with personal sales experience, data can be an effective tool in identifying which vehicles are the most desirable in your area.

“It can also tell you how much they should be priced based on the live retail market, helping you to build trust with your customers, and importantly, helping you to sell more cars more quickly.”