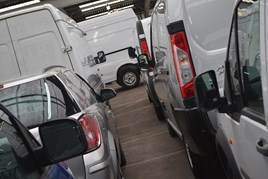 With holidays dominating April, with only 18 selling days and Easter holidays, overall activity was not as strong as the same month in 2016 or the first quarter of 2017.

But Matthew Davock, head of LCV at Manheim, said: “Despite a challenging month where bank holidays impacted the general market mood, and in which we witnessed a slightly tougher atmosphere in the commercial vehicle market than we have seen so far this year, our vendors enjoyed strong sales performance.

“It was helped by a reduction in the average age of vans sold through our auctions of seven months, compared to April 2016 – down to 63 months – and average mileage falling by more than 10,000 miles year-on-year, to 74,731.

“Following a record first quarter in terms of the number of vans sold and records set for the average conversion rate at Manheim’s commercial vehicle auctions, ‘activity’ was the buzz word in April.

“Overall buyer footfall and clickfall remained healthy for a bank holiday period, but it was slightly down on previous months, and many buyers have reported that April was the slowest retail month seen this year.

“While buyer activity in absolute terms may not have been as high as previous months, the growth in our buyer base in the first quarter means that we are very well-placed to capitalise on the opportunity that the rest of the year presents, and we are confident that buyer activity will remain healthy in the coming months.

“Condition remains key, as in April we saw a £461 year-on-year increase in damage on stock being returned and offered for sale.

"As we enter the time of year when seasonality plays a bigger role, we continue to focus our vendors on realistic reserve setting given current market dynamics, to ensure that they continue to enjoy healthy conversion rates.”