Premium car brands saw slower price growth in the used car sector during July as the effects of an “aggressive” battle for market share began to take hold, Auto Trader has suggested.

The online car marketplace identified a significant disparity between volume and premium brand price growth, with volume brands registering an 8% rise compared to premium’s 1% in July, as the overall average value increased by 7% to £12,709.

Auto Trader said that the shift represented the highest rate of price growth for volume brands, and the lowest for premium since January 2017 (0%).

It said that market data gathered as part of the compilation of its Retail Price Index had shown that the gap initially emerged late last year.

In August, both volume and premium brands recorded the same levels of sustained price growth (3%), but then began to separate, with volume continuing its trajectory, whilst the rate of growth for second-hand premium cars slowing significantly.

Karolina Edwards-Smajda, Auto Trader’s director of commercial products, said: “At this stage it’s unclear as to exactly why there’s such a contrasting pricing strategy between volume and premium brands, but it’s likely two key factors have coincided.

“For one, premium brands are competing more aggressively for market share and continue to develop sales at a healthy pace. And secondly, since Brexit and the impact on the value of the pound, we’ve seen volume brands less inclined to chase the market with lower margins.

“There’s clearly an emerging trend here and something we’ll keep a close eye on in the months to come.”

Diesel remained off the pace in terms of price growth during July, but managed to claw-back some of its lost share of searches by fuel type on Auto Trader. 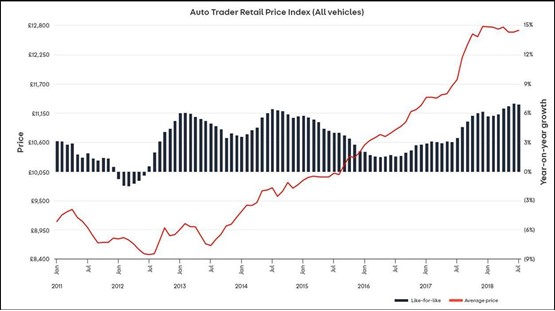 In July, diesel managed to slow this trend, creeping back up to 49% of all fuel related searches – it’s first increase since October 2017.

Edwards-Smajda said that it was “very reassuring” to see that diesel vehicles performing were performing “so stoically” in the market, despite the negative rhetoric surrounding the fuel-type.

She added: “However, whilst diesel is showing great resilience we cannot ignore the inevitable. AFV adoption remains disappointing but as the barriers to entry reduce and awareness amongst consumers increase, they’ll not only catch up with diesels, but will very quickly overtake them.

“There are clear signs this is already in effect and represents a very exciting opportunity for retailers.

“A diverse forecourt that accounts for all consumer tastes, including budget conscious car buyers and the more technologically savvy, will be essential to sustaining growth.”

Online searches for AFVs during July accounted for just 4% of searches by fuel type on Auto Trader, however.