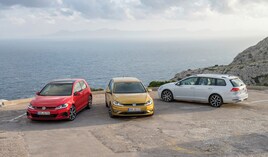 The Volkswagen Golf was the most popular used car to be sold via the Motorway stocking platform during the coronavirus pandemic.

New research by the online marketplace found that used car buyers favoured the Golf more than any other model, between March 2020 and February 2021.

Other top sellers include the Ford Fiesta and Mini.

Tom Leathes, CEO of Motorway, said: “While sales of new cars continue to fall and consumers have avoided public transport to stay safe, the used car market has seen incredible growth over the past year. Our data shows which cars have proved to be the most popular to sell this year.

“Cars like the Volkswagen Golf, Ford Fiesta and Mini Cooper are consumer favourites and really hold their value in the used car market, with lots of people seeking them out. It’s also great to see just how many used electric cars are being bought and sold right now - the demand for EVs is growing fast and people are realising they can pick up some great models second hand without breaking the bank on a new one.”

Motorway’s research found that the Nissan Leaf was the most popular electric model to be sold on its platform. It was the only EV to feature in the top 20 list, however.

There was major growth in the selling of both petrol and diesel vehicles - with Land Rover featuring high on the most sold list - with popular models taking 9th and 11th place, implying the government’s changing legislation on fuel has got some people reconsidering their ownership of premium fossil fuel used cars.

The average price of a used Land Rover increased by 2% at the end of 2020, with values up 4% year on year according Motorway.

While Auto Trader recently claimed that the value of the average vehicle marketed via its online advertising platform had risen for a 41st consecutive week, Cap HPI revealed that its data showed a downward trend, but insisted there was “no cause for concern”.

Cap HPI’s live values reported an overall drop of 1.5% (around £150-per-car) at the three-year point during February, meaning that used car trade values have dropped by 9.4% (almost £950) since October.

The most expensive used car sold on Motorway was a Lamborghini Huracan, which sold for £172,250.  Three more Lamborghinis featured in the top five, while the rest of the top 20 most expensive cars featured brands like Porsche, Land Rover, Bentley and Mercedes.

An Italian yacht-themed Abarth 695C was the rarest motor sold on the platform this year, alongside an Infiniti FX30d.