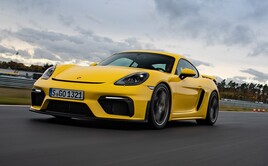 What Car? has teamed up with valuations experts at Cap HPI to rank the UK’s slowest and fastest depreciating cars.

While desirable performance and premium models from Porsche, Lamborghini and Alpine were found to hold on to their value, volume models haemorrhaged their value fastest.

The fastest depreciating models lose more than two-thirds of their value at the analysis’ sample age of three years and 36,000 miles, What Car? found.

Steve Huntingford, editor of What Car?, said: “There are a number of factors that influence how a car depreciates. As our research shows, badge appeal and a high list price are no guarantee of a slow depreciating car.

“Factors such as what segment it falls into, how well it has sold, the trim and option levels available, and fuel types all influence how well a car holds its value over the years.

“It’s important buyers do their homework when choosing a next car, especially if they are looking to trade it in or sell it on in a few years.”

The SMMT reported that plug-in hybrids (PHEVs) were more popular than EVs, at 6.8% and 6.5% of the market, following the Government’s decision to cut the value of its Plug-in Car Grant (PiCG).

EVs are now expected to account for 8.9% of registrations in 2021, down from the 9.3% initially forecast in January.

The What Car? top 10 for the slowest depreciating cars included a plug-in hybrid and two fully electric models, demonstrating the appetite for alternative fuel vehicles (AFV) in the used sector.

Porsche’s Cayenne E-Hybrid SUV, Tesla Model 3 and Porsche Taycan were found to retain 57.6%, 58.2% and 60.9% of their values after three years, respectively.

All of the top 10 models retained more than half of their value after 36,000 miles of use.

In contrast, many of the fastest depreciating vehicles retained less than a third of their value under the same conditions.

Worst of all was the Audi A8 55 TFSI quattro Vorsprung – the fastest depreciating model in the findings – with a retained value of 27.3%, representing a drop in value exceeding £77,000.

Here are the slowest and fastest depreciating cars in the UK, according to What Car? and Cap HPI: