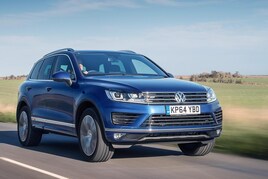 The 2016 Volkswagen Touareg SUV has been ranked as this month's fastest selling used car by Auto Trader.

The VW brand's premium-leaning SUV took an average of just 22 days to sell, according to data from Auto Trader’s Fastest Selling Index.

In total, eight 4x4s and crossovers made it on to the national top 10 list of fastest sellers.

"Every generation has combined luxury, quality, comfort and the latest technology to create a compelling packaging.

"The latest version, when specified as the striking-looking Black Edition, has proved a big hit with new car buyers, with features such as LED matrix headlights, air suspension, Digital Cockpit and a panoramic roof all included as standard.

"For used buyers this makes it so much more straightforward to find a car with all the equipment they need."

SUVs are currently the most in demand body type on Auto Trader.

Based on the volume of searches and advert views, demand levels have increased 10% year-on-year (as of July 15, 2021), whilst levels of supply have dropped -8.7%.

Auto Trader said an "imbalance of supply and demand has given SUVs a strong market health", with a 20.5% increase year-on-year, and has also helped drive used prices up significantly.

Karolina Edwards-Smajda, director of commercial products at Auto Trader, said: “We’ve seen already very strong levels of buyer demand accelerate following the reopening of physical forecourts in April, but it looks as though it’s been given an extra boost in anticipation of the easing of most COVID-19 restrictions this week.

“This is having a significant influence on the speed of sale and used car prices, as well as the overall market health.

“It is still crucial however, that retailers keep abreast of the micro and macro market conditions to inform their pricing and sourcing strategies, and ultimately, to ensure they are making as much profit from their forecourts as possible.”

Auto Trader’s market analysis revealed that the overall national average days to sell has decreased since the start of the year.

The data shows that it currently takes an average of just 23 days for used vehicles to turn on UK forecourts, down from 43 days at the start of the year and representing a decrease of -47%.