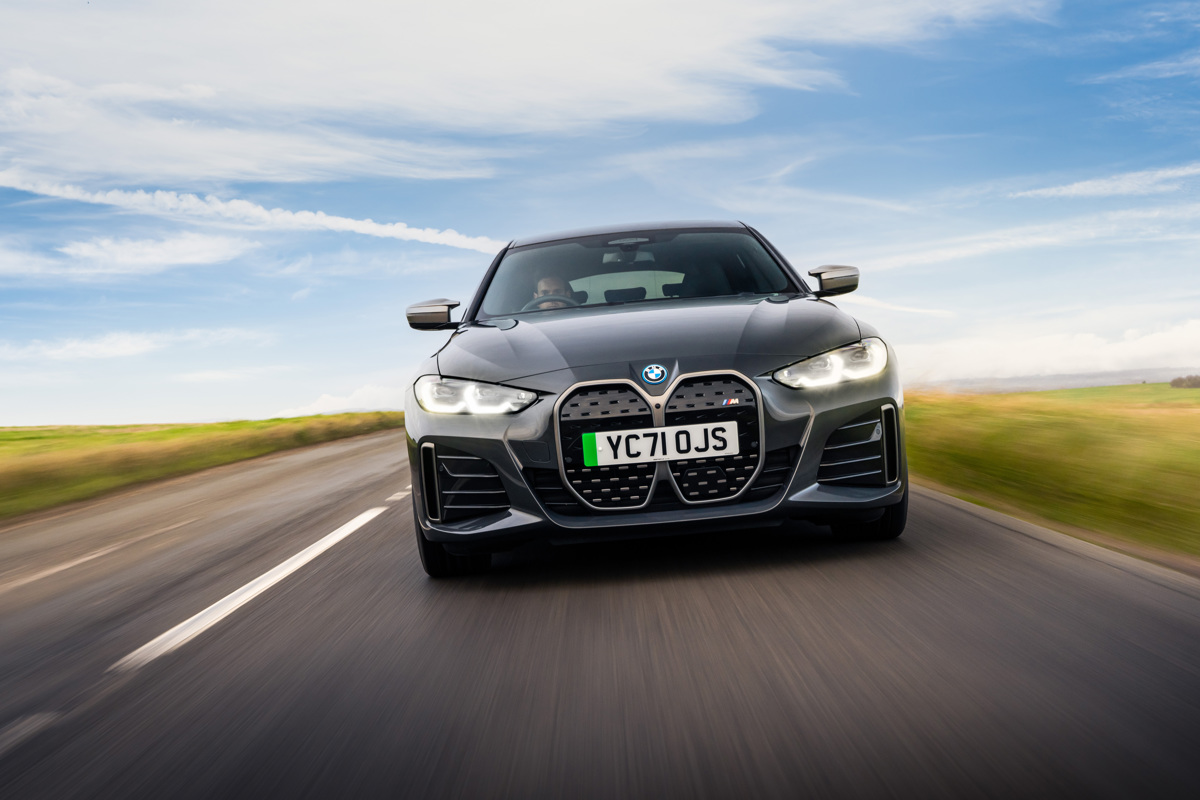 It may have been a long time coming, but BMW’s new i4 electric vehicle (EV) has certainly been worth the wait.

Electric models have formed part of the German carmaker’s line-up for almost a decade, but BMW has seemingly sat back and watched newcomers like Polestar and Tesla encroach on its stronghold of the compact executive segment.

That time appears to have been well spent and Munich’s finest is ready to fight back, with the new i4 providing the driveability benefits of a conventionally-powered BMW in a class-leading zero emissions package.

Sharing a body with the recently launched 4 Series Gran Coupe, the i4 is not a clean-sheet EV like the BMW iX. It does, however, make use of the brand’s latest electric propulsion technology, which means a WLTP range of up to 365 miles and the ability to add 100 miles-worth of charge in 10 minutes.

Such capabilities put the i4 at the forefront of its segment.

Compared with the 4 Series, the only noticeable difference between the two cars is found inside, where the i4’s infotainment screen has grown to 14.9 inches in diameter and swallowed up the climate controls into its touchscreen. It uses BMW’s eighth-generation operating system, which is a marked step up from its already well-revered predecessor.

The new set-up is crisper, with more connectivity and greater levels of customisation. It retains the familiar rotary iDrive controller in the centre console, along with touch and voice control. Simple functions, like activating the heated seat, are now more than one button press, however.

Two versions of the i4 are available. The eDrive40 is the core model, offering up 340PS to the rear wheels via a single electric motor. Buyers can pick from familiar Sport and M Sport trims with this powertrain.

The i4 exhibits little compromise from sharing its shell with an internal combustion engine car. It’s beautifully composed, with well-balanced handling, sharp brakes and direct steering. Battery weight is well contained, although not entirely unnoticeable. The i4 feels more dynamic than some of BMW’s recent petrol and diesel models, which have gotten a little soft, while delivering a much greater shove of acceleration.

The eDrive40 can reach 60mph from rest in less than six seconds, with equally potent mid-range capability. It feels as well-honed and characterful as a BMW from 20 years ago, just without the soundtrack of a neatly-tuned six-cylinder petrol.

Stepping into the M50 showcases what BMW can really do when it tries its best. When driving around town or on the motorway there’s little to distinguish it from its lesser-powered sibling, but the might of the twin motor set-up is every bit of what you’d expect from a BMW M Car.

Now 60mph is reached in less than four seconds and the i4 can slingshot itself out of any situation with immediate response. The experience is capped off with more secure roadholding, a firmer ride and sportier detailing for the exterior.

Charging the battery can be completed with similar rapid pace. DC charging at up to 210kW is possible – providing you can find such a charger.

A full charge using a home wallbox (7kW) will take around 13 hours, while a 50kW public charger can boost the battery from 10% to 80% in a little more than 40 minutes.

Once you factor in the accessibility of the BMW retail network and its aftersales support – plus the much plusher interior and better build quality – the i4’s higher cost seems justified.

While many carmakers are having successes with all-new EV-only platforms, including BMW with its iX SUV, there’s something about the i4’s familiarity with BMW’s old-school “ultimate driving machine” mantra that makes this package one that’s hard to overlook.

How important is the i4 in BMW’s electrification strategy?

The BMW i4 is an incredibly important model for us and is key in our strategy for electrification. It’s the first all-electric premium car from BMW for the mid-size segment, which is the core of our brand, and, thanks to the model’s fifth-generation BMW eDrive technology, it incorporates the very latest in charging technology, electric motor, high voltage battery and power electronics. We’re also giving our customers options through different variants – the BMW i4 M50 is the first BMW M car with all-electric drive, giving customers all the thrill and performance of our petrol M cars but with an electric drivetrain. It’s also worth noting that the BMW i4 and its battery cells are manufactured using 100% renewable energy and the fifth-generation e-drive motor does not require any materials classified as rare-earth metals, so not only are there zero tailpipe emissions, the production is more sustainable too.

Which will be the most popular model?

We’ve had a really positive response from our customers and so far the sales split between the eDrive 40 and i4 M50 is pretty even. In the long term, we anticipate that eDrive40 M Sport will be more popular due to its blend of performance, range and a high level of standard specification.

What is the expected lead time for a new i4 – is it affected by the semiconductor shortage?

For an order placed today, a customer will be looking at a summer 2022 delivery. There are no semiconductor restrictions currently impacting this model. However, like all manufacturers in the automotive industry worldwide, we will be watching this closely.

What support or services can BMW dealers offer i4 buyers to help them get to grips with owning an EV?

BMW offers its customers a range of services to help with the transition to electromobility. Customers can visit BMW Electrified, a website dedicated to illustrating the potential savings for customers switching from ICE to PHEV or BEV, and also tackle any concerns around range using interactive maps. When a customer takes delivery of their new BMW i4, their retailer can also enrol them into the BMW Charging programme – subscription-free for the first year – and have access to more than 11,000 public charging points across the UK, many at highly discounted rates, and also the use of 173,000 charge points across Europe. Using the My BMW app, drivers can also easily locate nearby chargers and see their battery status to enjoy a stress-free charging experience. Customers seeking home charging can have a wallbox installed by their BMW retailer and our partners bp Pulse.