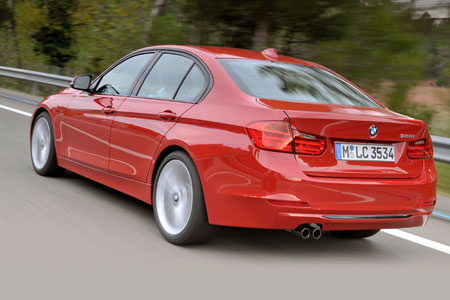 The sixth generation of BMW’s best-selling model continues a success story which has seen 12.51 million 3 Series models sold since its inception in 1975.

The 3 Series is considered by most as the benchmark executive saloon and the additional features on this model will please loyal customers and conquests alike.

Eco Pro, first introduced on the 1 Series, makes its way onto the 3 Series and brings BMW’s Efficient Dynamics package to the forefront. Eco Pro can reduce fuel costs by up to 20%.

It really does change the way you drive, but it doesn’t force driving style tips on you, it’s entirely the driver’s choice to engage it.

Customers can also select the Comfort, Sport and Sport+ modes on the Drive Performance Control system to adjust the car’s settings to suit the situation.

There will be four engines at launch: 180bhp and 163bhp 320d with Efficient Dynamics, four cylinder 328i petrol and a higher powered 335i.

Auto start/stop comes as standard and an eight-speed auto transmission can be specified across the range. Two lower powered diesels, a 316d and 318d will arrive in March.

An entry level 320i petrol and Active Hybrid3 version will follow.

BMW expects full year sales to reach 21,000 units with a fleet/retail split of 70/30.% The top seller will be the 320d Efficient Dynamics in Sport spec.

This model will be the fleet favourite at launch, emitting 109g/km and capable of hitting 68.9mpg

This means a VED rate of £20 and companies can write off 100% of cost against tax.

Three new trim “lines” are being introduced to sit above ES and SE. Modern, Sport and Luxury lines aim to give the 3 Series’ interior more personality.

However, the Modern line is the only major misstep.

The trim features a log-cabin style three-dimensional wood surface which could only be acceptable in markets like the US. But at least BMW is trying something different. An M Sport version will be available in summer.

Despite losing 40kg in weight, the new 3 Series is actually 93mm longer than its predecessor. This means slightly more legroom in the back, but it’s still quite cramped for an adult. Boot space has been improved by 20 litres to 480 litres.

Agility and driving dynamics remain outstanding attributes and the 3 Series proves it’s possible to combine sportiness, comfort and economy in one package.

Steering is precise and the 3 Series has plenty of grip when driven enthusiastically, but it’s also able to transform into a comfortable motorway cruiser at the flick of a switch, with ride refinement improved over the previous generation.

When driven in Comfort or Eco Pro bumps are absorbed without a fuss.

Flick back into Sport or Sport+ and the throttle opens up and the suspension tightens.

It’s an enormously enjoyable car to drive and BMW has succeeded on improving what was already a brilliant package.