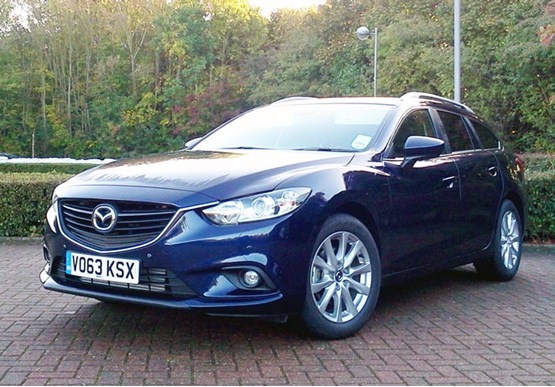 Mazda dealers are about to get the third model in its more efficient new generation, the C-segment Mazda3. But now that the D-segment Mazda6, the second model to get Skyactiv technology after it launched with the CX-5, has been on the market for almost a year, we decided it’s time to put one through its paces.

So at the end of October, we took delivery of a Mazda6 Tourer. We will review it for 12 months, during which it is likely to cover up to 20,000 miles as we visit franchised dealers, manufacturers and automotive suppliers across the country.

Our test car has the same Skyactiv 148bhp 2.2-litre turbodiesel under the bonnet as the CX-5 we tested previously, so we know it’s a reliable, gutsy unit.

It’s reasonably efficient too, with claimed combined fuel economy of 64.2mpg and 116g/km CO2 emissions – that compares favourably with the 62.8mpg and 119g/km of its ageing and slower rival, the Ford Mondeo 2.0TDCi estate.

Both sit in VED band C, so cost £30 for a year’s road tax, and both incur an 18% benefit in kind (BIK) rate for company car users. The car comparator on Mazda UK’s website calculates that over three years/36,000 miles, our Mazda6 would save £404 in fuel and £468 in BIK over the Mondeo. The Mazda’s boot capacity of 506 litres is smaller than the Mondeo’s, however.

We specified our Mazda6 in mid-level SE-L trim, priced at £23,595 on the road, with the only additional extras being a navigation package (£700 – free for business customers) and ‘stormy blue’ mica paint (£530). Private customers can buy the same model on a 5.9% representative APR hire purchase offer that gets a £1,500 finance contribution from Mazda.

In this grade, the Mazda6 Tourer comes with the standard kit any business motorist would want: 17in alloys; dual zone air-con; multi-function leather-trimmed steering wheel; cruise control; front and rear parking sensors; Bluetooth and a CD player with USB and aux-in connections. It also has Mazda’s smart city brake support (SCBS) system, which can prime the brakes or conduct an emergency stop at speeds from 3-19mph, if it detects a risk of collision the driver hasn’t spotted.

Hopefully, that’s one piece of equipment we won’t get to review in the coming 12 months.

What’s been said about the Mazda6 Tourer

Autocar
The new 6 Tourer is an attractively styled estate car with a practical cabin of decent quality, attractive design in most parts and impressive specification, but it is less rewarding to drive than we hoped.

What Car?
Low fuel consumption and CO2 emissions make the Mazda6 Tourer affordable to run as either a private or a company car. The 148bhp diesel engine is seriously strong and flexible.