How to make your valeting more efficient 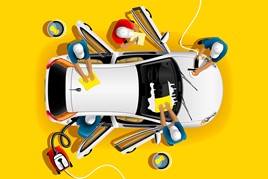 Customers expect a clean and valeted car, whether they have just bought it or just had it serviced – an expectation that has built a multimillion-pound industry.

But like any business activity, valeting has to deliver value for money and operate as efficiently as possible. So what are the lessons for valeting companies and dealers as they attempt to maximise efficiency?

The central question is whether dealers should contract out their valeting or have an in-house resource.

David Warren, the commercial director at Motorclean, one of the biggest valeting companies, makes the case for contracting out: “In general, subcontractors are paid on a per unit basis, so you pay them for what gets cleaned. From an employee perspective, you’re paying staff, irrespective of how many cars get cleaned and then you tend to lose productivity, because they’re on a set rate for the day.”

Stuart Hodson, the operations director for the Glyn Hopkins Group, which has 50 sites across the south-east, employs a valeting company, but following some dissatisfaction with the quality of the work, the company considered ‘in-sourcing’ the function. However, this proved not to be an efficient alternative.

“We looked at taking it in-house, based on the churn of contracted staff doing it. We looked at what we would need to put in place, in terms of a resource to manage it, but we didn’t think it would be efficient to do that, when you can use a big company that’s obviously got a pool of people they can pull from.”

The pool of valeters that the specialist companies can access gives clients a flexibility that can prove useful and efficient.

Hodson said: “If we know we’ve got a fleet order going into one of the sites, and we can tell our valeting company 24 hours in advance, they can have two or three extra people there to get those cars done. If we were trying to recruit people ourselves, we wouldn’t have that luxury, because we’d only have what we needed on a regular basis.”

However, when Romford Mazda’s dissatisfaction with the inconsistency of valeting company staff became an issue, it took another approach, as dealer principal Amarjit Shokar explained: “We’ve used various contract valeters. When they initially want the contract with you, they send you their best people. They might be there for three weeks and then their best person goes to another new contract, replaced by somebody who isn’t as good.

“We went to an approach where we had self-employed people, and we supplied all the chemicals and machines. We found that worked better. We’ve found a company that teaches people how to valet cars and how to use the chemicals properly, how to machine mop, etc. We’re hoping that will lift the standards.”

From valeting to MI

Valeting companies have been cleaning cars for a long time, however, and say their processes are already tried and tested.

Warren said: “There are only so many ways you can clean a car, and over 30 years, we’ve pretty much honed the right way to clean a car. So bringing efficiencies when actually cleaning a vehicle is very difficult.

“What does bring efficiency is the management systems.”

When valeting companies were starting out, Warren said a docket was written out in triplicate for every car that was cleaned, generating a huge amount of paperwork.

“We started to take away those workflow tickets with an electronic system 15 years ago and it’s grown to provide full management information. There are loads of different reports that can be generated, but generally there are four or five key indicators from a cost control perspective.”

Automation offers advantages to the dealer, too, said Hodson: “Each of the valet bays has got a screen. It puts the work into an order for them, so the valeters know which car to clean next.

“When they just had a stack of paper tickets, they would just go and clean whatever car they found next. This system puts the work in the right priority, so the output is more efficient. They’re not cleaning cars any quicker, or any more cars, but you’re getting the cars cleaned at the right time.”

Warren said the economies of scale that valeting companies offer to dealer groups are an important source of efficiencies – along with the additional associated services that they offer.

“Years ago, you would win dealerships’ business one by one. But with consolidation in the market base, and the growth of valeting companies, we started to do more group deals. We then looked at the supply chain and looked at how can we show value and efficiency.

“So we’re now an integrated service provider – we do facilities management in dealerships, cleaning the dealership and doing remedial work around the site. We’ll valet the cars, for service and sales, and then we take the imagery of the vehicle just after it has been cleaned.”

Autoclenz offers a fully insured collection and delivery service to minimise inconvenience to dealers’ customers. It now also offers alloy wheel refurbishment, and small enhancements to the standard wash and vacuum, such as dressing tyres or stripping carpets.

“These are all either self-funding or low-cost to improve aftersales customer experience,” said sales director Martin Peters.

So what further efficiencies could be possible for the valeting industry?

Warren said: “We work with automated car washes, but inevitably the car is never finished when it comes out the other side. If you want a quality finish, it doesn’t really speed up the process that much.

“You can also have a big central vacuum where all the leads drop down from the ceiling and that’s efficient. But you would only use that at big sites where you clean 3,000 cars a week. At conventional dealerships you’re still working with vacuum cleaners, pressure washers and pretty much the same sort of chemical.”

Hodson thinks having space is the key: “If valeters were to have better and more modern facilities, and a bit more space, I think they could be a lot more efficient. Old petrol stations, for example – there’s plenty of space to move the cars around and it’s almost like a production line.

“We’ve looked at doing it off-site, but once the car’s been moved, you’re almost back to square one and you’ve got to do it again when it arrives.” CRAIG THOMAS