Consumer uncertainty is the main hurdle to the car retail sector’s revival after showroom doors reopen on April 12, according to industry leaders.

An exclusive AM survey of the sector’s chairmen and directors, carried out in partnership with JudgeService YourPoll, showed dealers should be marketing the appeal of buying a new car now as Lockdown 3 nears its end. 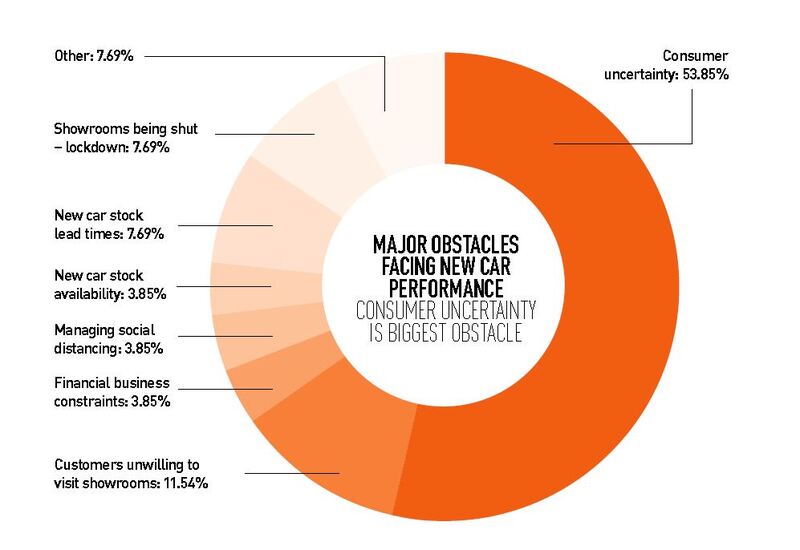 Asked what is the most significant barrier to new car sales, 53.9% of respondents – a mix of chief executives, directors and other ‘C-suite’ leaders – said it is consumer confidence, and 50% felt the same regarding used car sales.

And 57.7% said it was the main driver in reduced aftersales throughput, despite Government allowing servicing and maintenance work to continue.

But Cambria chief executive, Mark Lavery, told AM that retailers should be emphasising the “feel-good factor” a new vehicle brings.

“There isn’t much out there right now that is going to compare with the feel-good factor of buying a new car,” said Lavery.

“Television is littered with adverts for foreign holidays but, honestly, not many people will be keen on going abroad in 2021. With the Bank of England (BoE) telling us that people have managed to save money during the crisis, all we can do is encourage them to come and buy a car, and why not? It’s just what a lot of people need to cheer themselves up.”

The BoE said in February that private savings accounts were up £125bn in 2020, but warned that consumers may not be keen to spend the UK economy back to health due to economic uncertainty and news of redundancies. It suggested 70% of consumers will hold on to the savings they accrued.

Yet buyer confidence may be boosted by the UK’s trade deal with the EU, the extension of Government’s Coronavirus Job Retention Scheme (CJRS) to September and the vaccination programme running ahead of schedule.

As evidence of this, the UK’s monthly Gfk Consumer Confidence Index already rose five points to -23 in February.

To boost their profile ahead of lockdown’s end, major AM100 dealers have seemingly turned to television and sports events – two of the few feel-good pastimes available to ‘stay at home’ consumers.

Vertu Motors has advertised on TV and sponsored Channel 4’s F1 coverage, plus online retailers Cazoo and cinch are getting brand exposure in sports sponsorship deals.

Marshall’s chief executive, Daksh Gupta, said: “We started planning this marketing activity 18 months ago, but it has clearly paid dividends in lockdown. Together, it’s seen 100 million live viewers exposed to our brand on TV.”

The SMMT and National Franchised Dealers Association (NFDA) have lobbied for early reopening of showrooms. 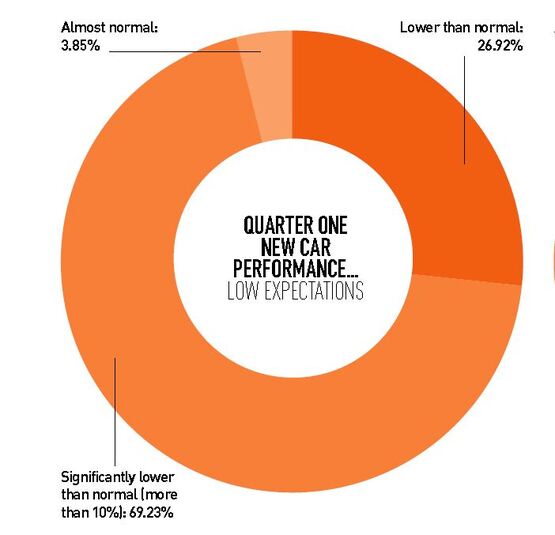 Yet survey respondents placed the restriction behind consumer confidence in their list of major obstacles. Just 7.69% felt showrooms being shut was a ‘major obstacle’ to new car sales, and 15.4% felt the same regarding used car volumes.

Many more, 26.9%, said lockdown had been a major obstacle to aftersales, likely reflecting low car usage and a lack of annual service demand this spring due to the Lockdown 1 collapse in new car sales.

Data gathered by Cox Automotive showed orders for new ‘21’ number plate cars in March were down by as much as 30%. In the AM survey, barely 8% of respondents felt March would generate a ‘normal’ new car order take; 69.2% said orders would be ‘significantly down’.

Views were no more positive for used cars, where only 15.4% of the sector’s senior figures felt retailers would achieve ‘normal’ volumes for the time of year. 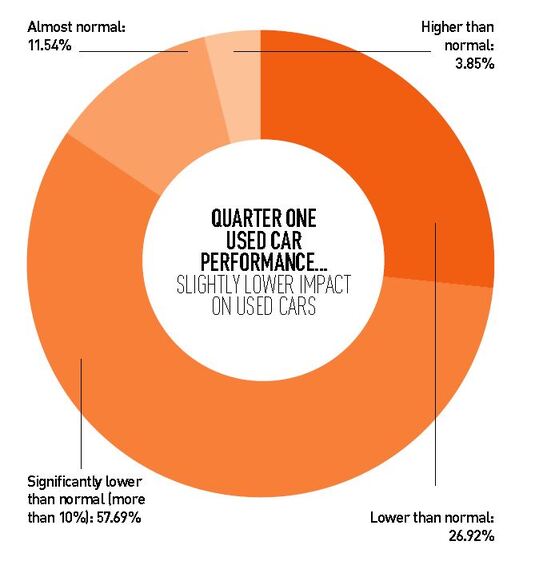 In all, 46.2% said used car sales activity would be ‘lower than normal’, while 34.6% said that it would be ‘significantly down’.

Just 3.9% felt that aftersales would be ‘significantly down’, however. While 53.9% said they felt activity would be ‘lower than normal’, 38.5% felt levels would be ‘about normal’.

Gupta and Cox Automotive insight and strategy director, Philip Nothard, both hoped March’s usual high sales would switch to April and beyond.

Nothard said: “April and May could see a surge in new car sales, coinciding with the recent release of the new ‘21’ number plate.”

But there are concerns that new and used car supply issues could cause the sector’s resurgence to stumble.

While 56.7% of respondents to the survey suggested that Brexit had, ultimately, had no effect on their new car business and 53.85% agreed to some extent it had not impacted parts supply, issues at UK ports and with the provision of semiconductors to EV-producing OEMs are ongoing.

A total of 15.4% ‘totally disagreed’ with the statement that Brexit had played no impact in their new car and parts business, however.

At AM Live in January, Deloitte director of automotive, Sarah Noble, suggested the supply of vehicles and parts could be impacted by Brexit and COVID for some time to come.

Gupta agreed it is a risk, but pointed out there are tailwinds as well as headwinds in 2021.

He said: “As far as the supply issue goes, many OEMs brought extra stock to the UK in late 2020 in anticipation of a hard Brexit, so we are better placed than we might have been.”

Gupta told AM he hoped to see a bounce back when England’s showrooms reopen in April, but he felt it would not be as significant as that after Lockdown 1, when all vehicle sales, effectively, stopped for weeks.

“It’s unlikely we’ll see such a surge in pent-up demand because the sector has managed to adapt and deliver sales despite lockdown this time around,” he told AM. “Year-to-date, (sales) are down 38.1% and clearly that’s not as far as the 97.3% dip seen during the first lockdown.”

Roadmap to recovery: a staggered return to trading or double hit of opportunity’?

Roadmap to recovery: a staggered return to trading or double hit of opportunity’?