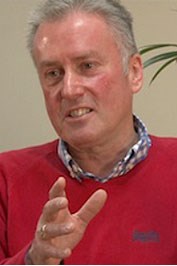 Taking a business public enables growth and cuts risk for owner-operators, but can lead to a loss of entrepreneurialism and a ‘family-run’ feel, warned Chas Howes, the former chief financial officer of Superdry.

Howes told members of the AM Executive Breakfast Club that he joined Superdry when it was a small business in the early stages of its development, and spent the next five years helping founders CEO Julian Dunkerton and brand director James Holder turn it into a publicly listed company that trades globally.

Although it launched in 2003, Superdry’s roots were in a partnership created in 1983 when Dunkerton was working on a market stall in Cheltenham, selling T-shirts created by Holden. By 2011, Dunkerton was worth about £500 million.

The pair started out by defining how they wanted the consumer to describe Superdry, and then creating the products and experience to match. The brand positioning was deliberate: approachable fashion; core, in-demand products such as jeans, T-shirts and hoodies’ and a premium price to secure big margins.

Superdry has kept product pricing consistent – it does not hold sales – and this has created trust.

“Customers know what they’re going to get,” said Howes. “It is phenomenally insulting to someone who goes in before Christmas and pays £24.99 for a T-shirt, then two days after Christmas it’s £12.99. How would you feel about that? Pricing is really important. Keep it consistent and it deepens the emotional engagement you have with the customer.”

When Howes arrived in 2007, he found a management team averse to debt, so all its growth had been self-funded to that point. He said another challenge was a lack of investment  in infrastructure – “if you’re a retail business you have to have infrastructure, you cannot survive without systems, supply chain, warehouse and so on”.

As the company didn’t like debt, Howes said it had to become as efficient as possible. It reduced debtor days from 71 to 35 to generate cash, did letters of credit and import loans, tackled slow-moving stock, and kept its number of suppliers low so it could leverage the relationships.

“Contrary to opinion, entrepreneurs don’t take risks. What they do is get others to share risks,” he said.

When the business was turning over £100m in 2009, Dunkerton decided to list the company on the London Stock Exchange.

Howes said: “It was a brilliant time. But it changed the whole business, its management style. The organisation is very corporate, which is a shame, because it was a family business.”

However, he said Dunkerton and Holder knew a PLC would attract the management talent to take the business to the next stage. They have since stepped down from their leadership roles.

“They’re brand and business builders, not doing it for a lifestyle,” said Howes.