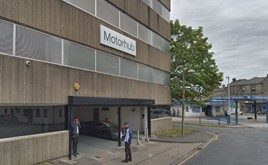 Supercar retailer Motorhub has been fined £53,567 by National Trading Standards following a series of second-hand vehicle sales that misled consumers in “reckless” fashion.

The Keighley-based operation, which is based in a former multi-story car park and currently stocks a range of used cars as varied as a near-£500,000 limited edition Lamborghini Aventador supercar and a 2005 Citroen Picasso priced at less than £500, pleaded guilty to six breaches of the Consumer Protection from Unfair Trading Regulations this week.

Among the offences that the company was fined for in a hearing at Leeds Magistrates Court were those of: selling vehicles with covered or disconnected dashboard warning lights to conceal faults with the vehicle; failing to disclose recorded mileages were incorrect; not declaring that a vehicle had been subject to accident damage; failing to disclose a vehicle had previously been used as a taxi.

Sitting at Leeds Magistrates Court, District Judge Susan Bouch, said: “I find the culpability to be reckless. There is harm from both the financial loss to each individual and distress and inconvenience caused to all. I impose a fine of £10,000 for each offence but after credit for a guilty plea this is reduced to £6,600 on each offence."

The company, whose directors are listed on Companies House as Mohammed Shabir, of Fern Street, Keighley, and Naveed Balal Bashir, of Strawberry Street, Keighley, was also ordered to pay £13,797.95 in prosecution costs and a victim surcharge of £170.

Motorsure Limited, who trade under the name Motorhub at Damside, Oakworth Road, Keighley, was initially investigated by National Trading Standards following complaints from customers who had purchased vehicles from the car sales company between August 2017 and May 2018.

National Trading Standards found that the company often relied on ‘no warranty’ claims to refuse to make refunds or repair vehicles when legally obliged to do so, adding that its staff also "exhibited intimidating, aggressive and threatening behaviour when complaints were made".

The company entered guilty pleas to six offences at York Magistrates’ Court on December 18, 2018, following an investigation by the National Trading Standards Regional Investigation Team based at City of York Council.

Lord Toby Harris, the chairman of National Trading Standards, said: “The business misled consumers about the cars they were buying, concealing quality and safety issues. If you suspect other illegal activity like this is going on, I urge you to report it to the Consumer Advice helpline on 03454 040506.”