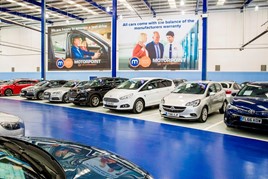 Motorpoint has handed more than 15,000 hours of paid time to its staff as part of the One Big Dream scheme launched a year ago to help employees “pursue their dreams”.

Over the last 12 months 90% of employees at the ID50’s top ranked independent car retail group took up the offer of free time to take part in a variety of activities, including volunteering for various charitable causes, doing the school run and even going for dinner with professional rugby player.

Motorpoint has given away over 15,000 paid hours to staff in the last 12 months to help them pursue their dreams.

The business, which was recently named a Top 100 Company to Work For by Best Companies for a fifth successive year and now occupies a new head office in Derby, said in a statement that it allows staff to take up to two paid hours a month to do something that they love through the scheme in a bid to “increase their happiness levels and improve wellbeing”.

It said that, in total, 625 days have been taken since the scheme launched in late September 2018 – the equivalent of 1.7 years.

Cat Moseley, HR director at Motorpoint, said: “We understand how challenging it can be to balance work and life sometimes and so we spoke with our teams and developed our ‘One Big Dream’ scheme last September.

“It’s proved to be a huge success with the vast majority of the team utilising those hours.

“Adding value to our employees outside of work is a key part of our employment offer. It’s a unique and versatile benefit that means something special to everyone, every time they use it.

“We’re already looking at ways in which we can improve ‘One Big Dream’ further as we head towards 2020 but it’s brilliant to see so many colleagues utilising this time to do some of the things that we sometimes don’t have the time to do and thoroughly enjoying themselves in the process.”

Among those who have taken advantage of the ‘One Big Dream’ scheme is Martin Lewis who spends his time as a Mentor for a charity called ‘Inside Out’, which supports people who have either been released or are in the process of being released from prison.

Lewis said: “I am extremely grateful to be given the time by Motorpoint to support my voluntary work with Inside Out.

“I am passionate about helping people succeed and having the extra hours to do just that makes all the difference.”

Motorpoint said that its ‘One Big Dream’ project is just one of a range of benefits available to employees.

Others include extra holiday days to support major life events such as birthdays, moving house or getting married. The company has also just launched a range of ‘Thank You’ cards with hidden treats inside them to give to staff who have gone that extra mile.

In addition, Motorpoint recently unveiled its own Charity Parking Scheme that will see staff at the company’s HQ raise £5,000 per annum for one of the company’s charitable partners by agreeing to pay £10 per month per person for a reserved parking space.

Back in July Motorpoint predicted reduced half-year profits ahead of its annual general meeting, stating that while it expected revenues to rise during the six month period to September 30, tighter margins would lead to reduced profitability.

But its latest published financial results showed 6.8% growth in turnover and 10% growth in profit before tax and exceptional items for the year to March 31,2019.

Motorpoint's turnover grew to £1.06bn and pre-tax profits before exceptional items to £22.9m in the period.