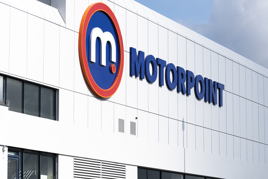 Motorpoint has added plans for a Coventry used car supermarket sites to its expansion plans for Edinburgh and Milton Keynes after growing its Q1 revenues by over 30%.

The car supermarket PLC said that it remained “encouraged by the pipeline of opportunities to expand our portfolio and thus increase market share” as it revealed detail of its start to 2022 in an AGM trading statement published this morning (July 27).

Revenues rose to £402 million in the period to March 31 with growth supported by vehicle price inflation, it said.

Motorpoint continues to drive ahead with an ambitious a mid-term growth strategy aimed at taking its annual revenues to £2 billion with the help of an improved omnichannel car retail offering and the expansion of its physical retail network.

In May it expanded to 17 used car retail locations with the opening of a new, 1.5 acre, 120-vehicle dealership in Portsmouth.

And its AGM trading update said: “We are confident that this is the right time to push ahead on our strategic objectives and their associated investments and are pleased to announce that we have secured a further new branch in Coventry.

“This will be opened later in 2022, in addition to the already announced locations in Edinburgh and Milton Keynes.

“We remain encouraged by the pipeline of opportunities to expand our portfolio and thus increase market share.  We will continue to invest in our customer proposition to gain market share in a relatively weakened competitive landscape.”

Motorpoint's used car sales volumes suffered a year-on-year decline on the post-COVID lockdown period in 2020 in April and May, but said growth had returned in June – a trend which continued into July.

And despite a decline in margins on 2021, Motorpoint said it was “pleased to be helping keep costs down for our customers” by maintaining its finance APR at 8.9%.

In annual financial results published last month Motorpoint revealed that it had more than doubled its pre-tax profits to £21.5m in the year ended March 31, 2022, as revenues rose 83% to £1.32 billion.

In today’s statement the business acknowledged the role the cost-of-living crisis was likely to play in its strategy, but added: “Despite the ongoing uncertainty, we will continue to invest with the consumer front of mind, in order to drive our strategy of significantly increasing our market share through price leadership, whilst continuing to deliver appropriate levels of profitability.”