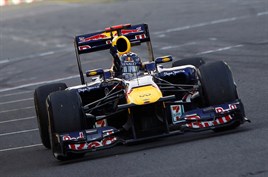 Infiniti will expand its partnership with the Red Bull Racing Formumla One team for the 2012 season with more prominent branding on the cars, driver overalls and team equipment.

In addition, Infiniti and Red Bull Racing will increase will increase the amount of global marketing and media activities throughout next year.

Speaking at the Korean Grand Prix, Andy Palmer, executive vice president, Nissan Motor Company, said: "When we announced the partnership back in March, our single objective was to boost global brand awareness for Infiniti.

"In just seven months, the results have exceeded even our most ambitious targets, leading to us to becoming the most highly-exposed automotive brand in Formula One this season.

"As we look ahead to the second year of our partnership with Red Bull Racing, we are now extending into exciting new areas of technical and product collaboration."

The partnership between the two will extend into technical collaboration with Infiniti expected to eventually replace Renault as the team’s main manufacturer partner.

Infiniti said it would also continue to build on its relationship with Sebastian Vettel as its brand ambassador and it will be creating "Vettel" versions of its models as a performance brand. Infiniti has already confirmed a Vettel version of its FX model.

Palmer said: “Doing the FX Sebastian Vettel version for Frankfurt was fun, but it’s also a kind of pilot.

"It’s about our equivalent of (Mercedes-Benz) AMG or (BMW) M Cars. We wanted to test the organisation and see if it could cope with this type of special version. Sebastian’s FX demonstrates we are able to do low volume specials and the FX Sebastian Vettel version is one of the first that will go to market.”