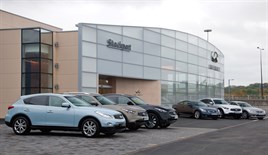 Infiniti has opened its fifth showroom in Stockport which will cover Great Manchester and the surrounding counties.

The brand said the new site on Bailey Road in Portwood would give it coverage across “important markets” like Altrincham, Alderley Edge, Wilmslow, Buxton, Knutsford and Worsley.

Infiniti says it is embarking on a growth phase with the target of taking one in 10 luxury car sales by 2016.
The new site is run by Mana Premiere Automobiles which also runs Infiniti centres in Birmingham and Glasgow.

It’s fourth site is due to open in Leeds soon. MPA is looking to have around eight Infiniti centres in the UK by the end of 2013.

Richard Braithwaite, Infiniti Stockport centre manager said the showroom was in a key location for Infiniti’s demographic and it has already sold its first car to “an ardent Lexus driver”.

Braithwaite, a senior manager with Nissan dealerships in the region for the past 15 years and fresh from launching the electric Nissan Leaf to the north west of England, said: “I have followed the progress of Infiniti in Europe and seen the momentum build. Now, to be part of it, with a fantastic new building and an elite and dedicated team is hugely exciting. We have a lot of work to do but I know the north west and I know Infiniti can do well here.”

MPA is a wholly-owned subsidiary of the Saleh Alhamad Al Mana Co in Qatar and is headed up by operations director and chief operating officer Lisa Ford.

Ford is a former market area retail director for Mercedes-Benz and general manager with HR Owen. Ford comes to Infiniti with 10 years’ management experience of luxury automotive brands in the UK.