Mitsubishi has re-entered the top 20 of the Experian Hitwise UK Automotive Brand Index for the most searched for automotive manufacturers online in the UK.

The index, saw Mitsubishi ranked in 19th place this quarter, up from 23rd place in September 2011.

While there was no change in the top four places (Ford is still in first place), further down the rankings there was considerable flux as Land Rover overtook Vauxhall, Mini bypassed Honda, and Skoda swapped places with Fiat.

Although Mitsubishi returned to the top 20, fellow Japanese manufacturer Mazda dropped to 22nd place, its lowest quarterly ranking of 2011.

Between October 2011 and December 2011 Renault climbed three places in the Index to become the 12th most searched for automotive brand in the UK. Renault accounted for 2.75% of all automotive brand searches this quarter, in part due to the announcement of its new electric car the Renault Ze.

Land Rover overtakes Vauxhall as fifth most searched for brand

James Murray, Marketing Research Analyst at Experian Hitwise, said: “This has been another fascinating quarter in the automotive industry with 11 of the top 20 brands changing position in our Brand Index and Land Rover, Mini, Renault, Skoda and Mitsubishi climbing up the rankings. 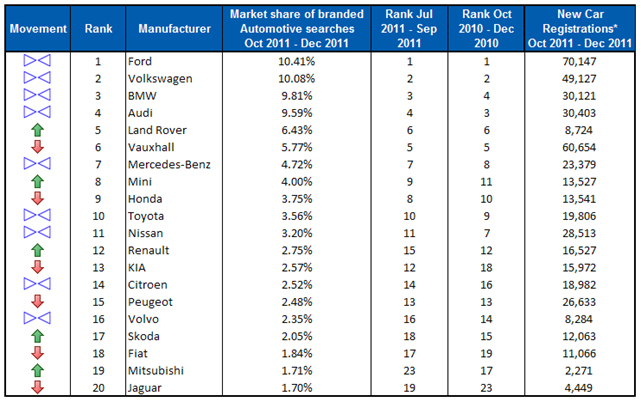