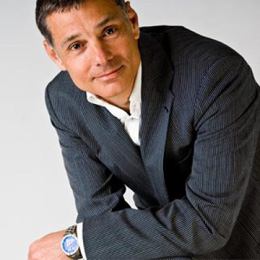 Do you remember seeing war live on the television for the first time?

It was 1991 when John Peters went to war in Iraq with 45 friends. He was shot down over enemy territory with his navigator John Nichols and taken prisoner. Their pictures were plastered across the news around the world.

He was interrogated over a 47-day period in Baghdad where he was beaten, burnt and threatened with mock executions. He thought that picture would be the last image his family would see of him alive.

Peters now runs an MBA course at Aston Business School with a particular focus on leadership. As a pilot he was a leader, but as Peters explains, it’s not until you are thrown into a world you know nothing about that your leadership skills can be truly tested.
He said: “What if you were replaced? You can be faster, better, cheaper - but everyone can do that.”

Peters recounted his feelings of preparing to go to battle for the first time.

He said: “Going to war is like travelling to central New York on September 10, 2001, knowing what will happen the next day.”

Peters’ Tornado bomber was at the front of the formation for the first air attack in the Gulf War. It was shot down by a surface-to-air missile launched by an Iraqi fighter after failing to hit a target while flying just 50ft in the air.

After a bright flash of orange, Peters pulled the bomber-jet up and ejected. Peters said: “I went from having all that power to being totally exposed and vulnerable. That’s when you really have to engage your brain.

“Everything before being shot down was fine as I had been trained to handle it, but being stranded in the desert with enemy hostiles approaching was not something we were prepared for.”

Peters and Nichols were left with fluorescent orange life jackets, an RAF dingy and vacuum packed package which they could not get into. Visibility across the desert was 50 miles and they knew it was only a matter of time before they were spotted.

After a two hour walk 25 soldiers approached on the horizon and so Peters hit the deck and waited for the inevitable to happen.
After a 45 minute wait the group of approaching soldiers opened fire with their AK47s, 45 yards away from the RAF pilot’s position.

After briefly considering whether they should go out in a hail of bullets, Peters held on to hope and believed they would survive capture.

Peters said: “Clearly, it was the best decision I ever made.”

He never had a problem with being a prisoner of war. His biggest regret is that he failed to hit his target.

He said: “You’re one in 1,000 as a front line pilot and UK taxpayers had spent £1 million on training me, but I failed to live up to expectations.

“My job was to drop a bomb on target, not to get beaten up in a room. People say I’m courageous, but I’m not. Courage is about having a choice.”

After being captured, he was transported to Bagdad. It was here that he was tortured and suffered under the bombings from the RAF’s continuing attacks.

Peters could only answer questions with his rank, number and date of birth. His answers were met with baseball bat beatings and cigarette burns. He lost two and a half stone in two weeks.

He said: “It feels like being held underwater and running out of air. You desperately want to survive and a take a breath.”

It was here in the interrogation rooms and cells that Peters’ leadership was truly tested. But at the time, it wasn’t obvious to him.
There were other prisoners going through the same ordeal and Peters said he had to convince his cellmates that they could and would survive.

He said: “Do your people trust and believe you can take them to a better place?”

Not only did Peters inspire his fellow prisoners, he also inspired thousands of troops going to war for the first time.

He recounts a time when he was in a bar (he couldn’t go to the pub for 18 months due to the media coverage featuring his battered and bruised face) but on one occasion he spoke to 19-year-old squaddies describing the terror of going to war for a cause they might not believe in – but they were happy to go in order to save Peters’ life. They told him: “We went because we wanted to save you.”
What made him survive was his son. He didn’t want him to grow up without him as a father and that single thought sustained him through all of his torture.

Realising he could not control his situation also helped him. This was key to his survival.

He said: “They would burn my hair and threaten to rape me, but what I realised was that I could not control any of this. I had to release control.

“As soon as I did, I accepted my weaknesses. I accepted it and it helped me to deal with my situation. Once you know you can adapt to your environment it is a lot easier to deal with.

“Now don’t think I have been mentally damaged by this. It’s actually given me huge confidence. What’s the worst you’re going to do to me now? Do you want to beat me up? Kill me? I’m not scared of death now.”

Peters said he did not have an ABC of leadership. But he did urge dealers to think about the way they lead their businesses.

He said: “Why do you lead the way you do? Sit down for three hours and really reflect on that.

Peters also believes leaders of businesses can become too easy on themselves as they sit in positions of power.

He said: “Think about how you were when you were 25. You rarely compare how you were then to how you are now. When was the last time you set a personal best?”

Join the AM Breakfast Club

The AM Executive Breakfast Club is free to join and exclusive to senior dealer group executives. It meets every quarter. Delegates enjoy a full breakfast, a presentation from a guest speaker and a chance to network and share best practice with senior figures in the UK’s motor retail industry.
Franchised dealer bosses are invited to attend the events for free.